Memory is Our Home by Suzanna Eibuszyc 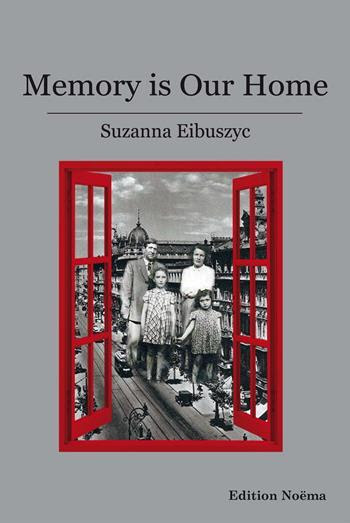 Memory is Our Home by Suzanna Eibuszyc

History is more than numbers, more than the story of how one war started on such and such a date and how it ended on a different date.

This is the history that Suzanna Eibuszyc shares with us in her moving book Memory is Our Home.  Combining excerpts from her mother’s diary with her own memories of stories her mother shared with her, Ms. Eibuszyc has created a work that will move every reader with the truth of what those years between 1917 and 1969 were like.

Ms. Eisbuszyc has allowed me to reprint three short excerpts from her book.

Introduction:  To be a “memorial candle”

It is said that in every survivor’s family, one child is unconsciously chosen to be a “memorial candle,” to carry on the mourning and dedicate his or her life to the memory of the Shoah. That child takes part in the parents’ emotional world, assumes the family burden and becomes the link between the past and the future. I realize now that my mother chose me, and that in turn, I chose my daughter to be that memorial candle.

As far back as I can remember, my mother shared her stories with me. Her tales filled me with overwhelming sadness, but also brought color to our drab existence in the southwestern corner of Communist Poland. I have never seen any photographs that connected my mother to the extended family she so often talked about. I was frightened, confused, and ashamed, part of me did not believe my mother. The source of my sadness, which I can’t shake even today, is that I wish I had been a wiser child, but instead I retreated, I built a wall around me and protected myself. I did not know how to reconcile the overwhelmingly sad stories my mother was transmitting to me. In order for my child’s mind to resolve something I could not comprehend, I decided that my mother had to have made those people up, that those people had never existed. Today I keep asking myself over and over how I could have been so unwise.

Her Mother’s Story of Fleeing Warsaw

Finally, the day I had been planning and waiting for arrived. On November 7th, 1939, Russia had not entered Warsaw as we expected. I felt it was time to leave. I ran home, packed a few things, and went to Anja to say good-bye. Anja, once a strong voice behind the Warsaw workers, still had a fighting spark in her eyes. She was waiting for her husband Szymon and pacing the room when I came in. She held one baby in her arms while the other hung onto her skirt. I could see she was worried for her children and was doing her best not to show it. In a firm voice, she told me to stay safe and that we would see each other again soon.

It was very difficult for me to leave my family. I was one of thousands of young people who were willing to leave everything until the German occupation was over. Those with commitments, especially those with children felt it was best to stay. I tried to convince my siblings to come with me, but my efforts were in vain. They were so filled with hope that any day the English or the Russians would come to liberate Poland.

After seeing Anja, I met Sala with her children. Sala looked terrible. She was wrapped in a black satin housecoat, the same one she had been wearing when her building caught fire. She was dirty and her hair was uncombed.  Her face was swollen and her eyes were red from crying. She kept repeating that she knew we would never see each other again. Her two boys, five and three years old, were practically naked and were barefoot in November.

Before the occupation, the salon had been finally thriving. Sala was even able to buy beautiful gold rings for her fingers. Her children always had extra pairs of shoes and sets of clothing. It was all destroyed when the bomb fell on her building.

Through my tears, I could only manage to say: “I promise, we will see each other again soon.” This picture of my sister with her two boys, barefoot in the winter that last time is a haunting memory for me. It is still with me today.

Running away from Warsaw and from my family was the most difficult thing I have ever done. It is difficult to relay today how strong my fear of the Nazis was. I had no idea what racial genocide was, or that the Holocaust was about to be unleashed against Europe’s Jews by Nazi Germany. My three older siblings had five beautiful children. I loved playing with them and I did so every chance I had. I will never know what extraordinary people they would have grown up to be and what contributions to our society they would have made. After the war, I searched for them in vain.

I often think back to how they were when I left Warsaw that November. Adek’s little girl Bluma was five years old in 1939. She was a precocious little girl who was always attached to her mother. Adored by her maternal grandmother, she was always dressed in the latest style. Bluma had big dark eyes and light hair that fell in loose curls on her shoulders. A shiny, white bow was always tied to her hair right in the middle of her head. She would put her small hand in mine and let me take her for our weekly walk. On those walks I told her about my favorite Maria Konopnicka fairytale but I never told her that Marysia was an orphan. Bluma was a sensitive child. I did not want to make her sad.
Though we had almost lost him from illness, Sala’s son Piniek grew up to be a healthy five-year-old boy. An independent child, he reminded me so much of his father Moniek. We also had our weekly walks in the park. Piniek asked a thousand questions, and I was expected to have an answer for every one of them. Gutek took after his mother, always smiling and content. He had dark eyes and a dark head of curls.

Anja’s son Pinkus was three when I left Warsaw. We were best friends. I got to spend the most time with him because of Anja’s dangerous second pregnancy. He loved for me to read to him at bedtime. When I thought he was asleep and closed the book, he would open his eyes and say, “one more story Ciocia, aunt Roma please.” I never refused. His little sister, also named Bluma, was only three months old when I said good-bye to my Anja.

My final farewell was to my Adek. I handed over to him my most precious possession, a box filled with diplomas, a few of my favorite books and an album with photographs. I told him to take care of it.  My parting words were, “I will see you in a few weeks.”

At the time, England had promised to help Poland fight the Nazi invasion. We had also heard rumors about how the Russians were going to occupy more Polish territories. All of this gave me hope that Poland would soon be rid of the Nazis and I would return home to my family. Besides some clothes and food that I could carry, I left everything behind.

At the last minute, Pola decided to come with me. I told her to pack up fast. Sevek had also decided to join us. The three of us left to meet up with my girlfriends Reginka and Hanka and another last minute friend, Janek. Our group of six left Warsaw on the morning of November 8, 1939, with a mixture of fear and optimism.

My mother’s accounts of her life in Warsaw and surviving in Russia and Uzbekistan had a deep impact on my imagination.

Overwhelmed, I looked for ways to feel safe. I focused my attention on what I perceived to be my mother’s incredible adventure in Russia. I tried to picture my mother living in exotic, interesting places: the beautiful cities of Saratov and Moscow where she even experienced romance and love. While in Uzbekistan, she lived in the desert, under a hot sun and she ate exotic food. I never allowed myself to see her hungry or sick. My mother was heroic and strong, splendid and beautiful in her tailored black coat. Her stories influenced the choices I made when I left home.

Strangely, I found comfort in unfamiliar and far-off places. Choosing to study ancient and present cultures was like revisiting the landscape of my childhood. I got to work under the hot sun, live in a tent, ride a camel and, like my mother did in Uzbekistan eat exotic food. I excavated in the desert at Tel Beer-Sheva, Israel. I observed the lives of Arab men and women, evoking my mother’s stories of strange lands. I remembered that when I was a child all I ever wanted was to follow in my mother’s footsteps and follow in her adventure. I was my mother’s daughter. I inherited her spirit.  We saw the world through the same set of eyes.  I was aware of an overwhelming fear of putting down roots, perhaps not wanting to have them severed in the same way my mother and her generation had.

Traveling had always put me in touch with my mother’s strengths and temporarily wiped out the negative voices that played in my mind. While on the road, surrounded by unusual, new places, I was happy and at home. I went back to communist Poland, still haunted by my memories of our departure, my mother’s inconsolable crying. I had to return. I was looking for something, a piece of me I had lost or perhaps left behind. I heard my father calling me back to the small, overgrown Jewish cemetery in Klodzko, where he was laid to rest.  Like my mother, I too had succumbed to the notion that Poland was my homeland, now the ghosts of my childhood were clamoring for attention.

More information about this book is available at http://www.memoryisourhome.com/

Thank you, John, for bringing this to attention and for providing a link about purchasing. Very moving.

Thanks, Maureen. What I find existing about this work is the mix of the mother's story and the daughter's story, that and the amazing amount of history the book covers, that whole long brutal period.