I was invited by Gladys Kirkland to give a series of poetry readings/lectures about my parents and their experiences in World War II to the Freshmen Social Studies students at Valdosta High School last Thursday (Oct.4), and I wrote up an introduction that I hoped would get the students interested in what I was telling them about.

Maybe you’ve heard of the M-1 rifle or the V-2 bomb or the B-17 bomber, or 2nd Lieutenants and Privates first class and 5-star generals.

We even give numbers to Wars. There was the 100 Year War, the War of 1812, the First World War, and World War II. Right now the US is fighting what’s some times called the Second Gulf War.

But it's the Second World War that I'm here to talk about.

If you go on line, and Google WWII statistics, you’ll get a lot of numbers, enough to fill up a couple or more textbooks.

You’ll find out that the Nazis murdered 6,000,000 Jews. You’ll find out that altogether 52,000,000 people died in the war, more or less. You’ll hear that 20 million died in Russia, 7,000,000 died in Germany. 2 million in Japan. I was surprised to hear that Yugoslavia, a country that I don’t think much about anymore and probably never did, lost 1.7 million people. The country my parents came from was Poland, and it lost 1/6 of its population. Before the war, there were 36 million Poles; that means about 6 million died. In Warsaw, the capitol city of Poland, a quarter of a million civilians died during a 60 day battle to throw the Germans out in 1944. 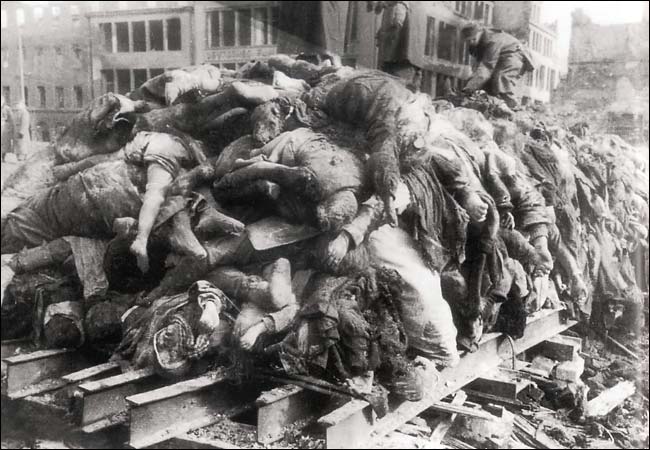 America got off pretty easy in WWII. It lost just a half a million, mostly soldiers. In those other countries it was about half soldiers and half civilians. “Civilians” is another way of saying wives and husbands and their children.

There are also the numbers involved in how much was spent on the war. The numbers here run pretty high. The U.S. spent the most money on the war, an estimated $341 billion. Germany was next, with $272 billion, followed by the Soviet Union with $192 billion. All the billions spent probably add up to a trillion.
There are also numbers associated with what kind of mess was made by the war. The Soviet government calculated that Russia lost 30 percent of its national wealth. As far as I can figure, that means it lost one out of every three of everything: houses, banks, cars, schools, railroads, bikes, and farms.

In Germany, bombing and shelling produced 4 billion cu m (5 billion cu yd) of rubble. I don’t know how big a pile that is but it sounds like a big pile of rubble. By the end of the war, the Germany capitol Berlin had been pretty much leveled. The people that count up such things estimate that 400,000 buildings were destroyed in Berlin. After the war, the Germans who survived the war got shovels and bulldozers and shoved all of those 400,000 building out of the city. Altogether there was about 17,000,000 cubic yards of rubble, bricks, bits of glass and silverware that melted together during the bombings, wood beams, busted up furniture, rusting pipes and porcelain bathtubs. It made a mountain 390 foot tall that in the past was used by Berliners looking to ski in the winter. It’s called Teufelsberg in German. That means Devil’s Mountain.

War does generate a lot of numbers, and the numbers tend to be big.

I was talking to a friend at VSU, a mathematician, a person who studies numbers, and she said that most people can’t imagine a number larger than 1000.

I only think about small numbers, human numbers. My mother, for example, would be one, my dad would be another one. That’s two, the two my poems are about.

(The photos are from the book The Fire: The Bombing of Germany, 1939-1945 by the historian Jörg Friedrich--there's a link to it on the right hand side.)
Posted by John Guzlowski at 11:27 AM

When I was in Southern Germany, the tour guide told us about the mountains of rubble. In Munich, for instance, they were covered with soil and grass grew over them. It's odd to think that what was once a building, destroyed by war, is not a grass hill in the middle of a big city.

I remember when I first read about the rubble in Germany. It was shortly after 9/11, and I was teaching a class where we were reading Vonnegut's great novel Slaughterhouse 5, about the fire bombing of Dresden and the 35,000 people who were killed by us.

I read about how much rubble there was in Germany, and I tried to understand it by thinking about the rubble after the twin towers came down. So much rubble, so long to clean it up.

And the rubble in Germany?

There are still areas in Berlin where you can see bomb damage.

But it's not just Germany. All over Europe there are ruins and the leavings of World War II.

In Hungary, in 1990 I came across a ruined bridge over the Danube.

The Germans blew it up when they were fleeing from the Russians at the end of WWII.

In London, if you go to the Albert and Victoria museum, take a look at the stone on either side of the main entrance. You'll see holes left by the shrapnel from bombs exploding during the Battle of Britain.

I've never been to Russia, but I can imagine how much rubble the Russians have to walk around each day.

When I see that picture of the piled bodies--human rubble--I think: they all had to get up that day and put on clothes to be killed in. They're all wearing clothes.

I got this from a friend, Mario Bartoletti

The problem with any numbers from WWII is that subsequent generations of young people cannot actually get their minds around such atrocities - they are just beyond their ability to grasp. So, the next thing we know, more young people are marching off to another war - with bands playing and flags waving.

Maybe it is that misguided "My country, right or wrong!" patriot philosophy, or jingoist refrains that de-humanize another nationality to the extent that they (or we) are prepared to forget any religious or moral restraints that were taught us when we were children that we should not kill. Instead, medals are given for doing just that.

This past weekend, we attended the Oktoberfest in Ontario Canada; the German Mennonite communities in that province go back to the 1700s and 1800s. We sat at tables, banging steins of beer on the tabletops, and singing Hofbrauhaus with great enthusiasm along with hundreds of others. My son in law at one point, said: "How could such a fun-loving people follow Hitler?" My reply was: "How can the first modern democracy, the United States, condone torture and illegal incarceration at Guantanamo?" He shrugged his shoulders and I said: "Because we, the people, allow it in the name of patriotism - and "protecting our country" from the evil-doers, to quote President Bush. For the Germans, it was the Jews; for we Americans, it is the Muslims. So, war continues - to kill, to destroy and to consume vast amounts of money.

As the old folk song goes: "When will we learn; when will we ever learn?"

Mario, Logic has fallen out of favor, in favor of whatever will help so-called conservatives sell their talking point. Oh well, we know where the buck stops.