DO WE LEARN ANYTHING FROM HISTORY? 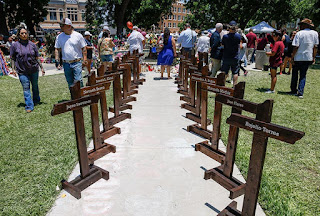 Do we learn from history?

As my mother – a woman who lived through a lot of history – would say, "That's the question."

I’ve been thinking about this a lot recently because of what’s been happening in the news.  First, there is all that terrible news about the Russian war against Ukraine.  It seems to go on and on and makes me think of all the wars I’ve known during my 74 years.  Then, if that wasn’t bad enough, we’ve started hearing a flood of news about the war in the United States against the children and the good people here.  So far there have been 232 mass shootings in our country since the beginning of the year.  I seem to go to sleep every night hearing about one mass shooting, and I seem to wake up every morning hearing about a different mass shooting.

I read about all this and hear about it repeatedly on the news, and I ask myself repeatedly “Don’t we learn anything from history?”

So what does history teach us?

Maybe what history teaches us is that the only good we can ever have is that SUV, that Lexus or Infiniti or Mercedes Benz we dream of.

All there is -- all that we can really hope for -- is that shiny Lexus supercar or that chrome Samsung refrigerator or that brand new Apple iPhone with direct access to a world of games like Wordle and sudoku because grace, justice, brotherhood, love, the age of aquarius, harmony and understanding are all lies.

You don’t think so?

Here's something Saul Bellow, a guy from my old neighborhood in Chicago who won the Nobel Prize for Literature, said:

I’ve known big-time history professors and sociologists who wonder about stuff like: What can history teach us?  But most people aren’t asking this question. It seems like most of the 7 billion people on earth are  asking, "Where can I get a good price on a Toyota Highlander?"

And why do they want to get that Toyota Highlander?

Because they know if they don't get it now before the next horde comes down from the mountains or the next ice age descends on us or the next war starts or the next killer shows up at the Walmart down the street, they'll never get that Toyota Highlander, never touch something that once for a couple of minutes gave them the illusion that things were looking up.

My latest column for the Dziennik Zwiazkowy

Posted by John Guzlowski at 5:14 PM