How I Came to Write Lightning and Ashes 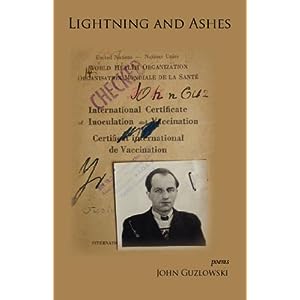 I started working on the poems for Lightning and Ashes after my father died in 1997.

Before he died, I thought I was finished with writing about him and my mom. I had started writing about them in 1979, and I felt I had written about all the poems I thought I was going to write about them and their experiences in the Nazi slave labor camps. I had written about how he and my mother were taken separately from their homes in Poland, about what their experiences in Germany were like, and about what life was like when my parents and my sister and I came to America. I felt I had said all I had to say about that part of my parents' life and what it meant to me.

After he died, I gathered all of these poems together and started thinking about publishing them in a chapbook, Language of Mules.

When a friend saw the chapbook, he said, "Now, you're done with the past, you can work on something else." Well, he really didn't say that. He said, "Now that you've published this, you must be all holocausted out. You can write about something else."

But I wasn't done writing about my parents. It didn't work out like that.

After my dad died, my mom started talking about her experiences in the war. She had never done that before except in the most general terms. I remember her saying how hard the war was. When I was a kid and would ask her about the war, she would say, "If they beat you, you run. If they give you bread, you eat it." And then she'd wave me away, tell me to do something, leave her alone. I wrote about this in my poem "Here's What My Mother Won't Talk About."

However, after my father's death, she wanted to talk about her experiences. It's as if when my dad was alive, it was his responsibility to talk about the war, and he would--at every opportunity, obsessively and deeply. He was like the man who wakes up from a terrible dream and can't stop talking about it because he needs to convince himself that the dream is over. He would talk and talk, and my mother would leave the room or tell him to shut up and get to work on some chore he started and hadn't finished. It was like that. And then my dad died, and there was nobody to tell the stories about the war.

And that's when my mother started talking to me. I remember it was the autumn after my dad died and I was visiting her in Sun City, Arizona. We were sitting around in the evening after dinner, watching TV, Schindler's List, and we got to the end of the film, and I asked her what it was like after the war in the slave labor camps. She started talking. She told me stories that night and the next night and the night after that. These were the stories that I used in my poem "My Mother Talks about the Slave Labor Camps." It was one of the last poems I wrote for Language of Mules.

After that, we would talk a lot about the war and her life before it. When I would visit her, I would have my yellow legal pad ready, to write down what she would say. Sometimes, when I didn't have it out, she would ask, "Where's you yellow paper?" And I would to take it out, and she would sit there and wait for me to ask her a question, and I would ask her things like what was the ocean like when we came over, or how did your father die, or what made you happy when you were a little girl? She would start talking then, and I would write.

The stories she told became a lot of the poems that I put in Lightning and Ashes.

Some of them came from her, and some of them came from my dad. In his last great illness, the one that he never recovered from, he didn't talk much, mainly what I heard from him were short cries for help or for his mother or my mother. He was in a lot of pain. Sometimes, he would lift himself out of his death bed and try to pull the IVs and the wires out. And sometimes, he tried to throw himself on the floor so he could escape the bed, crawl away. What I saw there was a man struggling to live, and struggling to live the way he felt he had to live. His dying taught me a lot about his living and what he must have been like when he was working and living in the camps. A lot of this went into the poems in Lightning and Ashes. What also went into the poems were the stories he told me in the years before his dying.

When I was a child, he would tell me about his life in the camps, the work he did, the way the Germans treated him, the friends he had and lost, the things he saw, the pain and joy and hunger he felt. Some of these things got into Language of Mules, but some of them I didn't remember until later, until after his death, and after my mother's death.

After my mother died and we came back from her funeral in Chicago, I spent a lot of time alone. My daughter was off teaching in Virginia, my wife was at work. I would sit upstairs in my study and think and write. These thoughts and writings became the poems in Lightning and Ashes, a book with as much of my mother and father's pain and anger and hunger and longing and dreams as I could remember.

When I finished the writing, I wanted to call the book Worthless because of something my mother would ask over and over about her life, "What was it worth?" But I couldn't bring myself to call it that.
Posted by John Guzlowski at 7:15 AM 9 comments: