My Father Before the War 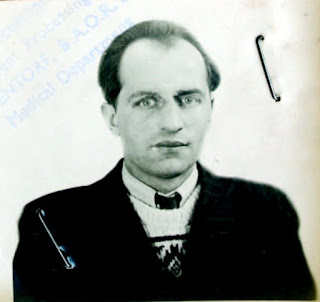 Before the war, my father imagined that he would always live in Poland according to the seasons and the holy days that came regularly like the ringing of church bells from the steeple of the small church in the village nearby.

A good Catholic boy, he loved going to the church on Holy Saturday to have the eggs and butter, the salt and bread blessed by the priest.

My father loved going early to church on Easter Sunday too, leaving the farm in the wagon even before the sun was a pink silence over the east, and coming to the church where the little girls stood in their white dresses holding lilies while the boys seemed serious and awkward in their older brothers’ suits.

And there was May Day when they pledged themselves to Mary, the mother of Jesus, and then Pentecost when he imagined the tongues burning above the heads of the apostles, and Christmas with its mysterious midnight mass that began in darkness and ended in light, and the feast of the three kings and more.

My father imagined that this would always be the life he lived.

To read more about my mom and dad, please consider buying a copy of Echoes of Tattered Tongues
Posted by John Guzlowski at 4:24 AM No comments:

I came here as a refugee in 1951. My first 3 years were spent in a refugee camp in Germany. My parents were put in the camp right after the war in 1945 -- after years in the German slave labor camps.

I don't have many memories of being in the refugee camps. My mom told me that one of my big fears was being separated from her. I needed to be with her all the time. One of my strongest memories in fact is discovering myself in a field next to our barracks building without my mom or dad near. I was weeping and angry and lost.

My parents heard me crying.

They had been talking to some other refugees in a building next to ours. They ran out and picked me and told to not to worry, they would never leave me.

My Mother and the Wolves 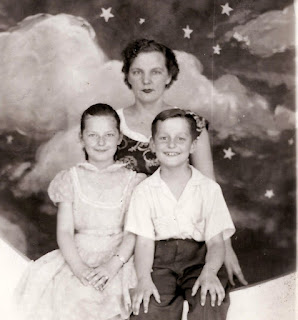 My mother grew up in a forest in Eastern Poland in the 1920s and 30s. She could hear wolves howling in the winter, and she listened to her mother's stories and warnings and passed them on to me.

This is a poem about the stories my grandmother told my mom.

My Mother and the Wolves

In their log house in the forests
west of Lwow, my grandmother
told my mother tales in the winter
to pry her thoughts from the sound
of trees splitting with the cold,
exploding with a crack like that
of her father's double-barreled shotgun

A cat, she would say, can't be trusted.
It comes in the short spring night
and sleeps on the priest's chest
watching his adam's apple
as if it were some mouse hidden
under a blanket of stubbled skin
and then striking its sudden claws
through his skin into cartilage

And what of the wolves, she'd ask,
the nine wolves that in the winter's
grey stone dawn would smash
their bones against the door,
hammering like hungry seals
until the door splinters and the baby
is got at – even from the cradle
even from its precious sleep?

And listen, Tekla, my mother's mother
would whisper then, there are men
as bad as wolves that no door
– no matter how solid the oak –
will keep out.

In 1942, my grandmother was shot to death by German soldiers.  They also killed my aunt and her infant daughter.   My mom was taken to Germany where she was a slave laborer  for almost three years.

I write about my mom and her experiences in my book Echoes of Tattered Tongues.   Here's an amazon link to the book.  Just click here.

The picture above is of my mom, my sister Donna and me, in an amusement park in Chicago in the mid 1950s.
Posted by John Guzlowski at 11:51 AM No comments:

My father grew up in poverty, an orphan working on a farm in Poland.  When he was 20, he was taken to Buchenwald concentration camp in Germany where he spent 5 years as a slave laborer.

He used to joke that Buchenwald was his high school and his university.  In fact, he didn't have much education at all, could barely read and write.

But he had faith, a faith that in some ways I believe was strengthened by the years he spent in a concentration camp.

This is a piece about what he believed.


What My Father Believed

He didn’t know about the Rock of Ages
or bringing in the sheaves or Jacob’s ladder
or gathering at the beautiful river
that flows beneath the throne of God.
He’d never heard of the Baltimore Catechism
either, and didn’t know the purpose of life
was to love and honor and serve God.

He‘d been to the village church as a boy
in , and knew he was Catholic
because his mother and father were buried
in a cemetery under wooden crosses.
His sister Catherine was buried there too.

The day their mother died Catherine took
to the kitchen corner where the stove sat,
and cried.  She wouldn’t eat or drink, just cried
until she died there, died of a broken heart.
She was three or four years old, he was five.

What he knew about the nature of God
and religion came from the sermons
the priests told at mass, and this got mixed up
with his own life.  He knew living was hard,
and that even children are meant to suffer.
Sometimes, when he was drinking he’d ask,
“Didn’t God send his own son here to suffer?”

My father believed we are here to lift logs
that can’t be lifted, to hammer steel nails
so bent they crack when we hit them.
In the slave labor camps in ,
He’d seen men try the impossible and fail.

He believed life is hard, and we should
help each other.  If you see someone
on a cross, his weight pulling him down
and breaking his muscles, you should try
to lift him, even if only for a minute,
even though you know lifting won’t save him.
_____

This piece and other prose and poetry pieces about my dad and my mom appear in my book Echoes of Tattered Tongues, available at Amazon.  Just click here.
Posted by John Guzlowski at 1:40 PM No comments: