On April 11, 1945, American troops liberated Buchnewald Concentration Camp.  It was a large camp housing about 80,000 prisoners, Poles, Slovenians, Frenchmen, Africans, and others.  They were brought there to work in the factories that the Germans built in and around the camp.

We have a lot of documentation and photos from this liberation because the great American journalist and photographer Margaret Bourke-White was with the US Army when they liberated this camp.  She took photographs that captured the suffering of the men who were in the camp.

Here’s one of her photos. 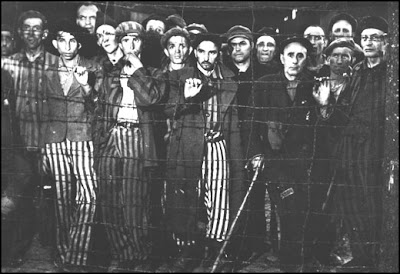 My father was a prisoner in this camp for four years.  He was just a Polish farm boy, and he was captured when he went into his village to buy a piece of rope one Saturday.  The Germans had surrounded the village and were rounding up men and boys to go to Buchenwald and work in the factories there.

A lot of times when we think of Concentration Camps we imagine the death camps the Germans built in Poland where the primary business was killing large numbers of civilians.  Buchenwald wasn’t a death camp.  Millions did not die there, burned in the ovens, their ashes scattered in ponds where the water is still gray 70 years later.  But they did die there.  About one out four people died each year.

What did they die of in Buchenwald?

Mainly starvation.  Fifty years later, my dad could still remember the hunger he felt.  He did hard labor 6 and even 7 days a week, 12 and 14 hour days, on a handful of food a day.  I’ve read accounts of what the men ate.  It came to about 600 calories a day. How much is that?  A Big Mac with Cheese is about 700 calories.  A Big Mac without cheese is 600.  But what my dad ate wasn’t a Big Mac.

I asked my dad once how he was able to stay alive.  He shrugged and said he didn’t know.  He said that most of the time the guards gave them a kind of gray gruel made out of some kind of grain and animal bones.  My dad called it “Hitler’s secret weapon.”  It wasn’t enough to keep a man alive, so my dad was always looking for things to stick into his mouth: twigs, pieces of paper, bits of cloth, leather buttons.  Once when he complained about the food, a guard hit him across his head with a club.  He knocked my dad down to the ground, but my dad got up and begged for food.  It was the wrong thing to say.  The guard clubbed my dad unconscious.  When my dad awoke, he was blind in one eye.

But men didn’t only die of hunger.  People died for simple infractions, annoying the guards by urinating out of turn, slouching in line, standing in the wrong place.

They died of cruelty too.  My father told me a story about one cold January night when the 400 men in his barracks were called out into the square for a roll call.  The men were dressed in rags, torn pants and shirts.  Some had shoes, others didn’t.  They had almost no protection from the snow and wind.  The guards lined them up in rows and told them they had to check the roster of prisoners, and then the Germans started reading the long lists of names.  As the guards read, men started dropping into the snow, falling to their knees and then keeling over.  And the guards kept reading.  They read through the roster once and then they said, “Oops, we missed a name,” and then they read through the roster again and again and again for six hours while men fell to their knees and died in the snow.  The next morning garbage carts came and collected the dead and took them to the ovens.

Others died from overwork, hangings, experiments, crucifixions.  One of my father’s friends, an artist from Wilno, was first castrated and then hanged.

But there are also many pictures of those who survived.

And when I look at the photos Margaret Bourke-White took the day the camp was liberated, I look for the face of my dad.  Thin as a shoelace, blind in one eye, with a scar across his skull where the guard beat him and beat him and beat him.  I haven’t found my dad yet, but I know I’ll recognize him when I see him.

In the Spring the War Ended

For a long time the war was not in the camps.
My father worked in the fields and listened
to the wind moving the grain, or a guard
shouting a command far off, or a man dying.

At last, one spring day he knew the war was there.
In the door of the barracks stood a soldier,
an American, short like a boy and frightened,
and my father marveled at the miracle of his youth

and took his hands and embraced him and told him
he loved him and his mother and father,
and he would pray for all his children


and even forgive him the sin of taking so long.

The photo above was taken by Margaret Bourke-White.

If you want to know more about my dad and his experiences in the war, you can get a copy of my book Echoes of Tattered Tongues, available at Amazon.  Echoes contains the chapbook Third Winter of War: Buchenwald, about my dad's experiences in that camp.
Posted by John Guzlowski at 10:46 AM 1 comment: