Last year, I posted the following. I wanted to thank all my generations and generations of Polish ancestors who simply kept going despite all the misery and grief they faced.

My people were all poor people, the ones who survived to look in my eyes and touch my fingers and those who didn’t, dying instead of fever, hunger, or even a bullet in the face, dying maybe thinking of how their deaths were balanced by my birth or one of the other stories the poor tell themselves to give themselves the strength to crawl out of their own graves. 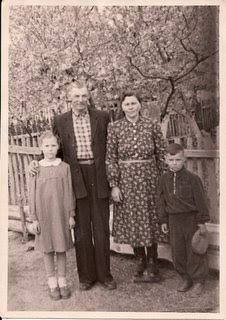 Not all of them had this strength but enough of them did, so that I’m here and you’re here reading this blog about them.

What kept them going?
.
I think about that a lot.

(The photos are of my uncle Jan Hanczarek. He was taken to Siberia by the Russians in 1941. The Russians enslaved millions of Poles. In the first photo, he is standing with his wife and two children. I don't know their names. In the second photo, he and his wife are standing at the grave of my grandmother and my aunt and my aunt's baby who were all killed by the Nazis.)
Posted by John Guzlowski at 8:51 PM 2 comments:

Andy Golebiowski sent me an article from the Am Pol Eagle entitled "WWII Survivors, Families Commemorate All Souls Day." Here's the picture by photographer Peter Sloane that accompanied the piece: 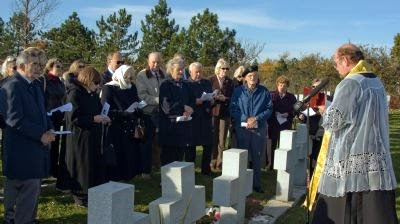 It brought back a lot of memories. All Souls Day was always a holy day that I felt deeply. In Poland the day was important. People would take candles and flowers and visit the cemeteries where their family and friends were buried. They would say prayers for the souls of their mothers and fathers, their grandfathers and grandmothers, the children who had died.

It was different in America. My parents had lost so many of their family members and friends, but there were no cemeteries we could visit to find their graves. The loved ones my parents lost were buried in Germany and in Poland, even in Russia. They were buried in graves my parents would never see again, and some of those graves no one would ever see. They were unmarked, lost. Sometimes, people had died where they stood, and their bodies were left there by the Germans or the Russians.

My parents didn't visit cemeteries on All Soul's day, but they did grieve. There was a heavy leaden grayness that hung over everything that day, and not all the candy I had collected on Halloween could lighten it.

Here's a poem from Lightning and Ashes about my mother's grief. It's about when she was taken to Germany by the Nazis and left behind her dead mother and dead sister and her dead sister's baby.

My mother cried for a week, first in the boxcars
then in the camps. Her friends said, “Tekla,
don’t cry, the Germans will shoot you
and leave you in the field,” but she couldn’t stop.

Even when she had no more tears, she cried,
cried the way a dog will gulp for air
when it’s choking on a stick or some bone
it’s dug up in a garden and swallowed.

The woman in charge gave her a cold look
and knocked her down with her fist like a man,
and then told her if she didn’t stop crying
she would call the guard to stop her crying.

But my mother couldn’t stop. The howling
was something loose in her nothing could stop.
Posted by John Guzlowski at 7:35 AM 2 comments: