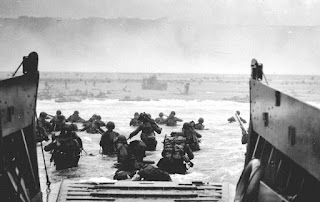 Today, June 6, is the anniversary of the Allied invasion of Europe.  It's a day that means a lot to me.  My parents were two of the millions of people who were swept up by the Nazis and taken to Germany to be slave laborers.  My mom  spent more than two years in forced labor camps, and my day spent four years in Buchenwald Concentration Camp.  Like almost every other Pole living in Europe at that time, they both lost family in the war.  My mom's mom, sister and infant niece were killed when the Germans came to her village.  After the war both my parents lived in refugee camps for six years before they were allowed to come to the US.  My sister and I were born in those refugee camps.  June 6, 1944 was the day that long process of liberation for all of us began.

I've written a lot about my parents and their experiences, and here are two poems from my book Lightning and Ashes about those experiences.  The first poem is about what the war taught my mother; the second is about the spring day the Americans liberated my dad and the camps he was in:


In the Spring the War Ended

For a long time the war was not in the camps.
My father worked in the fields and listened
to the wind moving the grain, or a guard
shouting a command far off, or a man dying.

At last, one day he knew the war was there.
In the door of the barracks stood a soldier,
an American, short like a boy and frightened,
and my father marveled at the miracle of his youth

and took his hands and embraced him and told him
he loved him and his mother and father,
and he would pray for all his children
and even forgive him the sin of taking so long.

Here's a link to a presentation I gave at St. Francis College about my parents and their experiences in World War II: Just click here.

My daughter Lillian sent me the following link to color photos from before and after D-Day from Life Magazine. The photos are amazing, and a large part of that amazement comes from the color. The color gives me a shock, a good one--it takes away the distance, makes the photos and the people and places in them immediate in a profound way.