My chapbook about my father’s experiences in Buchenwald has just been published by Finishing Line Press, and I wanted to say something about how I came to write the book and why the book is the way it is, focusing solely on my father Jan Guzlowski. 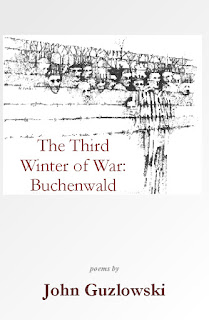 When I wrote Language of Mules, my first book about my parents, I felt that it was mainly about my mother. Poems like “Cattle Train to Magdeburg,” “Here’s What My Mother Won’t Talk About,” and “My Mother Talks about the Slave Labor Camps” carried a lot of the weight of the book. For me emotionally, they were the points in the book that I always came back to. The last poem I wrote for that book was the long, four-part poem “My Mother Talks about the Slave Labor Camps,” and that poem seemed to make all of the other poems about my mother coalesce around it. They were the poems that I always read when I did poetry readings. In fact, a lot of times at those readings, I would mostly read the poems about my mother in Language of Mules. They had a psychological and emotional unity and power that spoke to me every time. And they seemed to speak to my audiences too. People would invariably ask questions about my mom, but seldom did they ask about my father.

In Lightning and Ashes, my second book about my parents, I wanted to talk about both my parents. They had been together for forty-two years when my dad died in 1997, and I wanted to write about what that life was like, the war that brought them together and the memories of shared suffering that had kept them together despite their differences and their antagonism. The book feels balanced to me. In fact, I sometimes think that my parents are almost having a conversation in that book. My mother talks about her experiences, and then my dad talks about his, and I’m once again a child listening to their talk and trying to make sense of the lives they lived.
I feel that Third Winter of War: Buchenwald is my father’s book. He was a man who could never be quiet about the war, a man who could never put it aside. My mother could, and frequently she’d tell my father he should too, but he couldn’t. The war was always as present as it had been in 1943. He was a man who could talk for hours about the war, with me, if I was around, with strangers if I wasn’t, with himself if no one was around. Sometimes, I would come into a room where he was sitting and he would be having silent conversations. He would be gesturing, grimacing, turning his head this way and that. His lips would be moving, but he wouldn’t be talking. I would ask him what he was going on, and he would relax and smile, and say something like, “I’ve been thinking about the Germans.”
He was a man who prayed every day for the people he knew who died in the war, and he was a man who dreamt nightmares about the war. When I was a child living at home, I would hear his screams. They would wake us all. I don’t think I’ve ever heard screams like that. They were muffled in an odd way. Screams, in my experience, are usually accompanied by an explosion of air. My father’s nightmare screams were drawn in. Even in his sleep, it was almost like he was afraid to scream. I would come to my father’s bedroom, and he would be asleep and screaming and struggling with the Germans who were beating him.
I wanted to write about these nightmares, and by writing about them, I wanted to understand and capture what the war must have been like for him. I wanted to capture the thing that caused his nightmares and the nightmares themselves. I wanted to write about his hungry days searching through the bricks of the bombed cities he was forced to work in, and the threats and beatings he received. I wanted to know what he felt in the third winter of the war when he was in Buchenwald and felt he would never get out.

That’s what I wanted, but what I realized finally was that I could never understand his war or capture it. I would always just be a tourist walking through his experiences with a sketchpad and a pencil.

I was interviewed last January by Bruce Guernsey of Spoon River Poetry Review, and that journal has recently given me permission to reprint the interview.

If you want to take a look at the interview and a photo of me eating some kind of strange soup, you'll find both at my Everything's Jake blog.

It's at: http://everythings-jake.blogspot.com/
Posted by John Guzlowski at 7:30 PM No comments:

What Krystyna Slowikowska-Farley Told Me

I’m sending out letters this week trying to set up some poetry readings in Illinois or Michigan or Ohio, and I got to thinking about the readings I gave in Connecticut and New York last fall.

I was reading in front of old guys who can't walk now but who ran guns during the Warsaw Uprising when they were 14, 80-year old GIs who helped liberate Dachau and still can’t talk about what they saw in the cement factory, people my age whose parents worked in the slave labor camps in Germany. I feel my parents' lives deeply, and so it means a lot to me to meet and talk with people who were there in the camps and share with them and their children and grandchildren the stories about my parents.

One of the strongest encounters I had was at the Polish Cultural Club of Hartford, Connecticut, a wonderful place with welcoming people, Polish Americans very concerned with maintaining their connection with Poland. 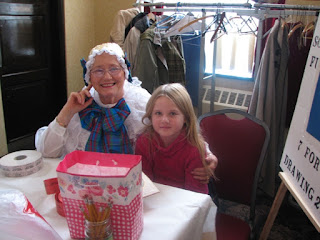 There was a woman there, an elderly Polish woman named Krystyna Slowikowska-Farley, who came to the United States like we did, as a Displaced Person in 1951. She volunteered to read some of the Polish translations of my poems, and I got five poems to her before the reading because I wanted to make sure she was clear about what and when she would read.

(This is a photo of Krystyna in a traditional Polish costume selling raffle tickets with a friend at the Polish Cultural Club.)
She was wonderful. Without hesitation, she critiqued the poems, told me which of my poems wouldn't work because they were "too dreamy" and which poems were "poorly translated." The poems had been translated by an excellent Polish poet and translator, but Krystyna didn't like some of the new words in his translations. She said there was too much English in his Polish.

When I finally asked her if she was ready to read the poems in Polish, she said to me with a smile, "Mister, I was in a slave labor camp in Siberia for three years, I'm ready for anything." When she said that, she sounded so much like my mother, that same kind of courage and readiness. Hearing her matter of fact statement about her time in Siberia, I really felt that Krystyna and my mother had gone through the same curriculum at the same school.

Krystyna did a great job of reading those poems. I watched the audience. There were people nodding their heads, and people weeping. Reading my poems about my parents is always such an emotional experience for me that I'm always on the edge of not being able to go on, but when I heard Krystyna read the poems, it was pure joy, hearing the Polish word, hearing her courage. And I didn't even know much about her, but the people in the audience who knew her and her story must have felt so very very much. I feel they’ll never forget her reading. It was like she had stepped out of the past and stepped out of a grave to talk to them and tell them that she survived no matter what the war did to her.

And my appreciation of her courage and readiness got even stronger when Krystyna and I spoke briefly at the end of my evening of presenting poems.

At every poetry reading, I always read one of the first poems I wrote about my mother. It’s a poem called “Cattle Train to Magdeburg,” about the 4 days my mom spent in the box cars going to Germany, and how even sixty years later she still remembered the trip, still remembered “the box cars bleached to Baltic gray.” After this particular reading at the Polish Cultural Club, Krystyna came up to me. She smiled and looked me in the eye and said, "Listen, your mother spent 4 days in the cattle cars. That was nothing. I spent 2 weeks." And she laughed.

I don't think this was boasting. My mother some times said the same sort of thing when she heard people telling their stories about the terrible things that happened to them during those years. Like I said, I don’t think this was boasting; I think there were a couple things going on instead. One is that people like Krystyna and my mother want you to know that, no matter how bad a time some one had, there are people who had a worse time. The other thing going on is that they really do want you to know how hard it was. My mother spent 4 days in the boxcars, Krystyna spent 2 weeks in the boxcars, Isaac Singer's mother and brother spent 2 winter months in a boxcar. They never left the boxcars. They died some place on a railroad siding in Russia. Their train was just shunted to the side and left there till spring.

Yes, there was always someone who had a worse experience, and that person will tell you about it with a laugh or with tears or with a shaking head. They want you to know that terrible things can happen but that people do survive. They walk out of graves, walk across continents, walk until they can’t walk and then they walk some more.

This is what Krystyna told me.
Posted by John Guzlowski at 3:24 PM 6 comments: