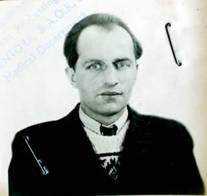 My father was probably the hardest working man I knew.

When I was a kid he would work double shifts, 16 hour days, and some years he wouldn't take vacations because the bosses at the factory where he worked would pay him double time. They would give him his vacation pay, and they would give him the week's salary on top of that.

Double time. He loved earning double time. He'd laugh and say it was one of the best things about America. Like getting something for nothing.

When he wasn't working at the factory, he was working around the house. Five years after coming to America, my parents bought a five-unit apartment building. Nine years after coming to America, they sold that one and bought a six unit on Evergreen Street in Chicago. My dad--and my mom--were always working on these buildings to maintain them and spruce them up. They plastered ceilings, painted walls, and stripped and varnished floors. When he wasn't doing that kind of work, he would be outside chopping wood to feed the massive furnace we had in the basement, or he'd be in one of the apartments with his pliers and hammer working on a leak. He didn't know a thing about pipes, but he was sure that sweat and hard work could fix them.

Toward the end of his life when he was dying of cancer, he was still hauling new orange trees -- with their roots bundled up in burlap -- into the back yard and trying to plant them. Sometimes he just couldn't do it, didn't have the strength to stand up, and he would ask me to help. He'd sit on a chair in the backyard, trying to breathe and pointing to a spot where he had lugged the orange tree.

Sometimes, he'd have so little breath that the words would be a whisper. You know what I mean.

Here's a poem about my dad and why he worked so hard. It's part of a sequence of poems about his working that appears in my book about him and my mom, Lightning and Ashes:

From "Looking for Work in America"

What My Father Brought With Him

He knew death the way a blind man
knows his mother’s voice. He had walked
through villages in Poland and Germany

where only the old were left to search
for oats in the fields or beg the soldiers
for a cup of milk. He knew the dead,

the way they smelled and their dark full faces,
the clack of their teeth when they were desperate
to tell you of their lives. Once he watched

a woman in the moments before she died
take a stick and try to write her name
in the mud where she lay. He’d buried

children too, and he knew he could do any kind
of work a man could ask him to do.
He knew there was only work or death.

He could dig up beets and drag fallen trees
without bread or hope. The war taught him how.
He came to the States with this and his tools,

hands that had worked bricks and frozen mud
and knew the language the shit bosses spoke.