I recently heard from my friend Halina Koralewski, a Polish-American interested in making sure Americans know about Polish and Polish-American history. She told me that that she had just read a book called World War II Through Polish Eyes, and she wanted to recommend the book. It sounded interesting, and I asked her to write a piece about it for this blog so that others could hear about this book. 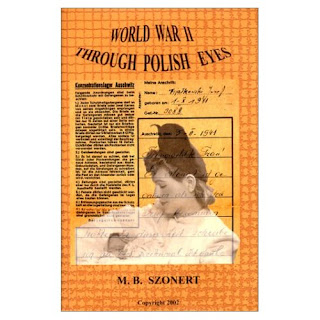 Here's what she wrote:

I just read the best book ever on Polish history, by M. B. Szonert - World War II Through Polish Eyes – a history of one Polish family (as well as the nation) before and during the war. What a great, great book. The family lost their relatives in the east, due to the Russian attack (which resulted in the deportation of Poles deep into Russia and Siberia).

After the war this part of Poland (almost ½ of its prewar land) was annexed to Russia and forever lost.

The boyfriend of Danusia (the protagonist in the book), a young Polish officer, was captured by the Russians in September of 1939. A couple of months later, in April 1940, he was executed along with 4,100 fellow Polish officers and 11,000 Polish government/administration officials, who were Poland's intellectual elite. These murders were all done on Stalin’s orders, and carried out by the NKVD (currently KGB), the infamous Soviet Secret police. The burial place of thousands of other Polish officers, also executed in 1940 by the Russians, is still unknown. This crime was never put to trial.

Also covered in the book is the Warsaw Uprising of August 1944, which is undoubtedly one of Poland's most heroic events, yet only a few lonely souls know of it. The Russian Army was on the other side of the Vistula River and didn’t help, while the Germans methodically suppressed the uprising, destroyed Warsaw, and murdered its citizens.

Another event is the battle of Monte Cassino – won by the Poles' famed Second Corpus after all other attempts by the Allied forces had failed. Roughly 1100 Polish soldiers lost their lives in this famous battle.

When the war ended, for Poland it was only the changing of an oppressor - from Germany to Russia. Although Poland fought Germany together with Allied forces, the West gave in to Stalin's demands and sacrificed Poland. Our best patriots, the Home Army fighters, were treated like criminals and executed by Russians. Russia in fact brought from Moscow their own puppet government that was never accepted by the majority of Poles. This terror continued until the Solidarity movement was born and eventually brought down communism.

What is both interesting and disturbing is that you will never find any of these facts in American history school textbooks.

In this particular book the family went through all the stages of Poland's troubled 20th century history and loses everything - only one family and so much suffering. A great, mind-opening book to read.

Poland was the only country in German-occupied Europe where there was an ultimate sacrifice - a death-sentence for helping Jews. Germans would kill Jews and Poles on the spot.

Nevertheless many Polish families helped their Jewish neighbors to survive in hiding. In Yad Vashem, where a tree is planted for each saved Jew, over 80% is attributed to the Poles, who were risking their own lives. Who indeed knows about it?

Poland's history and present is about forgiveness – yet how much can one nation forgive?
Posted by John Guzlowski at 9:28 AM 3 comments:

Ultimate Meaning in the Universe? 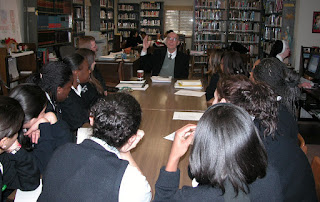 I gave a lecture recently at Benedictine Academy, a Catholic girls’ school, in Elizabeth, New Jersey.  I talked about my parents there and what they went through in the concentration camps during the war and what their lives were like after the war.  Near the end of my presentation, I read a poem that I posted recently on OpenSalon.  The poem is called "What The War Taught Her"; and it’s a bleak poem.

One of the things it talks about is my mother’s sense that all of the suffering she and the other people in the camps experienced was finally “worthless.”  She believed that none of it did anybody any good.   During the question and answer period afterward, one of the high school girls asked me if what happened to my parents strengthened my faith or weakened it.

It's a question that I think about all the time, but when you’re standing in front of a couple hundred young people and you know they have to get to their next class and that nobody’s got time for the long answer, you give them the short answer.   That’s what I did.  I told that student that I didn’t have any faith.

I’ll never see that student again, and I’ll probably never get to Benedictine Academy again, but I wish I could.  It would give me the chance to give that student the long answer, and here’s what I’d say:

When I posted “What the War Taught My Mother” at OpenSalon, one of the bloggers, Laurel, Not Lauren, asked me a similar question about my faith.  She said, "Tell me, in sifting through the rubble of so much evil and misery, have you come away with a sense that life has ultimate meaning, or are you a nihilist?"

When I look at the kinds of things that have happened and continue to happen, I have to wonder if there is an "ultimate meaning" and if that ultimate meaning is a good thing.

I came across a quotation by the Chicago novelist and Nobel prize winner Saul Bellow a while ago, and he seems to express for me the dark vision of that ultimate meaning. Here's what he says:

“You think history is the history of loving hearts? You fool! Look at these millions of dead. Can you pity them? Feel for them? You can do nothing! There were too many. We burned them to ashes, we buried them with bulldozers. History is the history of cruelty, not love, as soft men think. We have experimented with every human capacity to see which is strong and admirable and have shown that none is. There is only practicality. If the old God exists, he must be a murderer. But the one true god is Death and history is made by madmen and butchers.”

I consider that, and then I consider what my father and mother felt. My dad spent four years in a concentration camp, and he came out of that experience thinking that he had an obligation to be kind and helpful. I've written about this in my poem "What My Father Believed." You can hear Garrison Kellior read it online.

My mother, on the other hand, was a skeptic and a cynic. 100% of the time when I would ask her if there was some kind of ultimate meaning in the universe (and you can be certain I did ask) she would say, "No priest has ever come back from heaven to tell me if what the church says is true."

Despite this, she had a spoonful of optimism in her--A hopefulness that kept her going past the deaths she witnessed in the war, past the suffering in the camps, past two cancers that left her crippled for the last 4 years of her life.

When I once asked her after her second surgery for cancer how she could go on, she said, "Optimism is a crazy person's mother."

I think that optimism is my mother too.

Posted by John Guzlowski at 9:01 AM 6 comments: