Talking about Home at the AWP 2012

One of the things that immigrant poets are always writing about is home.  We write about the homes we left behind, imagine what they were like back then and dream about what they're like now.  You see this in all the writers who left their home countries to come to America.


This March 1 at 430 pm, I'll be talking about this idea of home at a panel with some other immigrant poets.  The occassion is the AWP conference in Chicago.


The title of the panel is What is Home: The Poetics of Negotiating the Old, Reimagined and the New, Adopted Homeland, and I'll be there with poets Patricia Jabbeh Wesley, Raza Ali Hasan, Malena Morling, and Ilya Kaminsky.


The session will be held in the State Ballroom at the Palmer House Hilton, 4th floor. If you're at the conference please stop by.


By the way, here's the official description of the panel:  What is Home: The Poetics of Negotiating the Old, Reimagined and the New, Adopted Homeland


Political conflicts and wars often inspire immigrant poets to produce works rooted in two worlds: the old and the new, adopted homeland. The displaced poet arrives in America from Europe, Africa, or elsewhere, stuck in their old world, often with nostalgic, painful memories, looking for home on the new landscape. Is the new literature American, European, African, or just world literature? Our diverse panel will explore the poetics of negotiating the delicate spaces of home in our poetry.
Posted by John Guzlowski at 7:13 AM 4 comments:

My parents met in a concentration camp in Germany toward the end of World War II. 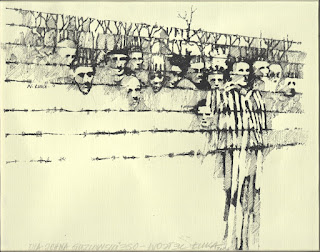 My mom had been brought to Germany by the Nazis to work in a slave labor camp. The day she was captured she saw her mom and her sister and her sister's baby killed by German soldiers. My mom was crying so much when she got to the camp that one of the guards said if she didn't stop crying they would shoot her.

Near the end of the war, my dad and some other slave laborers were brought to my mom's camp by German guards who were escaping the Russians. The Germans left him there and fled toward the American lines. When my mom saw my dad, he was a scarecrow in rags. He weighed about 70 pounds and had only one eye. He had lost the other when a guard clubbed him for begging for food.

They met in that camp, and after liberation they did what a lot of people did. First, they had something to eat, and then they got married.

It was a hell of a marriage. They fought and argued for the next 50 years -- even on Sunday mornings -- and even on Christmas Day.

It got so bad at times that -- after we came to America -- my sister and I would plead with my parents to get a divorce.

When I was about 57 or 58, I started wondering why they didn't get a divorce, why they stayed together through all the misery they put each other through. The answer to that question became a poem in my book about them, Lightning and Ashes. The poem is called "Why My Mother Stayed with My Father." 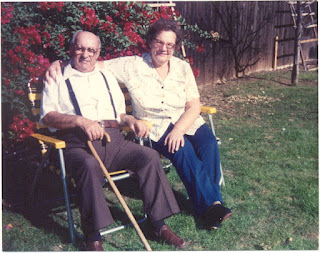 Why My Mother Stayed with My Father

She knew he was worthless the first time
she saw him in the camps: his blind eye,
his small size, the way his clothes carried
the smell of the dead men who wore them before.

In America she learned he couldn’t fix a leak
or drive a nail straight. He knew nothing
about the world, the way the planets moved,
the tides. The moon was just a hole in the sky,

electricity a mystery as great as death.
The first time lightning shorted the fuses,
he fell to his knees and prayed to Blessed Mary
to bring back the miracle of light and lamps.

He was a drunk too. Some Fridays he drank
his check away as soon as he left work.
When she’d see him stagger, she’d knock him down
and kick him till he wept. He wouldn’t crawl away.

He was too embarrassed. Sober, he’d beg
in the bars on Division for food or rent
till even the drunks and bartenders
took pity on this dumb polack.

My father was like that, but he stayed
with her through her madness in the camps
when she searched among the dead for her sister,
and he stayed when it came back in America.

Maybe this was why my mother stayed.
She knew only a man worthless as mud,
worthless as a broken dog would suffer
with her through all of her sorrow.

If you want to read more about my parents, you can check out a couple of the blogs here that talk mostly about them. One is called DPs in the Polish Triangle about what my mom and dad were like when they got to America. Another is called The Wooden Trunk We Carried With Us From Germany. There's also The Day My Mother Died.

Just click on the above titles, and it will take you right to them.