When I posted my blog about the wooden trunk my parents carried from Germany, I received a number of comments and emails about wooden trunks and samovars and cooking utensils and other things the Poles who came to this country from the DP camps in Germany brought with them after the war.

[If you want to read the original post, here's the url:
http://lightning-and-ashes.blogspot.com/2007_06_01_archive.html]
One of those emails came from Christiana Conway. Here's what she said.
"I read briefly your blog and wish to tell you I was born in one of those DP camps...Wildflecken, 1946. I also have a trunk just as you described your parents had. It was painted a dark brown outside, and inside it is plain wood with I believe my mom's name stamped on it. I would never have parted with it. I recently acquired it (somehow my brother wound up with it and I discovered this when they were moving. He planed on dumping it at the curb) It is the only piece of memorabilia I own that was of my Mother's and my journey to the USA."
Christiana also sent me a series of pictures of the trunk her parents brought from Wildflecken, the DP camp for Poles that Kathryn Hulme talks about in The Wild Place.
.
Here are two of the pictures:
.
This is a picture of the trunk from the side. Chris took the photo in her basement. 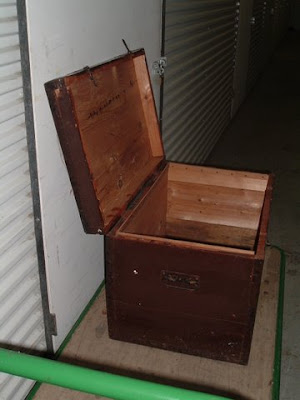 The next is a picture of the surface of the trunk. If you look closely, you can see some of the lettering beneath the layer of brown paint. Before being painted over, the lettering may have indicated where Christina's parents were coming from or where they were going. Christina is thinking of doing a rubbing of the trunk to see if she can retrieve some of those words that were painted over.
.
She says she can make out her mom's name on the lid of the trunk, Marie Chodacka, and under her name, Christiana says she can read, but only barely, the name of Frank Kozak of Clinton, NY, USA. Christiana feels that Frank must have been her family's sponsor to the USA . He was her sister's godfather, and he owned a dairy farm in Clinton. When Christiana was a child, she spent some summers there. 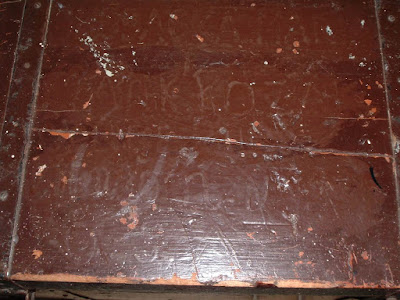