Buchenwald: The Work He Did 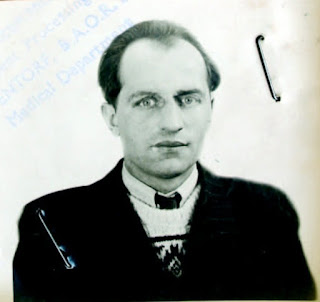 When my father was dying of liver cancer, the doctors popped him full of morphine, enough morphine -- they thought -- to keep him drifting peacefully toward his death, but the morphine wasn't enough. Nothing was enough to make him forget what it was like in the concentration camp at Buchenwald. He had spent 4 years there, a place where every year one out of every four of the prisoners was worked to death.

Dying and drugged up in 1997, he was back in the camps, starving and struggling to keep alive. He was convinced that the doctors and nurses were Nazi guards. He was also sure that my mother and I had betrayed him to the guards. There was nothing we could say to make him realize the war was over and he wasn't working in the camp and that there was no reason to be afraid.

He was still afraid.

Let me tell you one of the stories he told me about working in Buchenwald:

I lifted the shovel, saw the dirt, the clods still heavy with snow, and I knew that this would always be my life, one shovel and then another shovel until my arms were shaking. I never knew what the guards would say to me.

Maybe they’d ask me for a song, one of the songs I knew in Poland that I sang when I was a boy leading the steaming cows into the woods early in the spring. And I would smile and sing, and then I would ask the guards if they’d like another song.

Or maybe they would tell me I was a fool and my mother was the kind of pig the farm boys fucked when their own hands were weak from pulling on their sore meat.

And I would shovel in terror and think of the words I would not say but wanted to say:

Sirs, we are all brothers, and if this war ever ends, please, never tell your children what you’ve done to me today.


(You can read a version of this story and other stories about the work my father and mother did in Germany in my book Echoes of Tattered Tongues.)
Posted by John Guzlowski at 7:59 AM 9 comments: