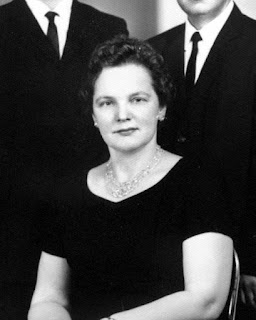 My mother died seven years ago this January 18.  She died in a hospice in Sun City, Arizona.

When she died, we had her funeral service near Darien, Illinois, where my sister Donna lives.  She made the arrangements for the services and the burial later up in Niles, Illinois, at St. Adalbert's Cemetery.

The priest who was going to perform the service was Father Bob, and he didn't know my mom at all so I offered to send him some information about her.

Here's the letter I sent him:

My sister Donna tells me that you will be doing the memorial service for my mother Teresa Guzlowski, and that you might like some information about her.

I’m not sure what my sister told you.  But here are some things I know about my mom.

My mother was born in a village west of in in 1922.  She lived there with her mother and father and sisters and brothers.  Her dad was a forest warden and they lived a quiet, peaceful life.  She liked telling stories of what it was like being a kid living near a forest.  She liked to pick mushrooms and sing and ride her pet pig Caroline.  She liked to joke that the pig Caroline was smarter than her brothers.

This all changed of course when World War II started.  In 1942, she was taken to a Nazi concentration camp in .  She left behind her mother, his sister and her sister’s baby, all killed by the Nazis and those who collaborated with them.

For the next 3 years she worked on the farms connected to the Buchenwald Concentration District.  She worked in the fields and the barns.  She said it wasn’t a death camp, but rather a slow death camp.  And she used to say that a lot of the pain she felt later in life in her legs and back came from work she did in those camps.

When the war ended in 1945, she married my father Jan who had also been a slave laborer, and the two of them lived in refugee camps in until 1951.  That year my parents, my sister and I were allowed to immigrate to .

When we first got to the , my parents and my sister and I worked on a farm in upstate to pay off part of the money that it cost to bring us to the states.

My mother once told me a funny story about this time.

My sister and I were 5 and 3 years old respectively.  But we were still expected to work.  One time we were picking straw berries and we started complaining how hard the work was.  We started crying and begging our parents to let us go back to and the refugee camps.  Life, we said, was easier there.  My mother told us that this was America and we had to stay here.

After putting in a year on the farm, we came to and lived in the Polish areas along .  Both of my parents worked hard.  My mom worked in a factory, in a molding room where she would work with hot plastic.  The plastic would be pressed into a mold to make telephone and such.  She would come home from work with burns on her arms from the plastic.

When she died, the scars were still on her hands and arms.  I bet if you look in the coffin you will see them still.

Both my parents worked hard at minimum wage jobs.  My mother often worked the midnight to 8 in the morning shift, so she could be around when we were home.  But their hard work paid off, and they were able to buy a house and to send my sister and me to Catholic grade schools and high schools.  This education gave me a love for learning that I’ve never lost and that led me to get a Ph.D. in English Literature and to spend my life teaching others and trying to convey to them what my parents taught me about the value of an education.

My parents retired to in the early 90s, and my dad died there in 1997.  Since then my mother lived alone, taking care of herself.  She was fiercely independent and didn’t want to be beholding to anyone.  When she went into the hospital that last time, she was still living alone, even though she could hardly stand and every step took effort that would break some one with less resolve.

In summary, what I would like to say about my mom is that she was a very very strong person.  She survived the camps and she survived a life of working on factory assembly lines and in skyscrapers where she cleaned offices from midnight until 8 in the morning taking out other people’s garbage and polishing the stains off of their desks.  And she survived the sometimes turbulent relationship she had with my dad and my sister and me.

If you could have seen her when she was dying, you would have seen that same desire to go on, to survive, even when there was little hope that she would ever be able to walk or talk or hear or breathe the way she had before her strokes.  For the last two years, when she and I talked, she would often say, “Johnny, how can I live without hope?”

I don’t know how she did it—but she did.  She lived without hope.

This isn’t to say that she was a saint.  A lot of times when we think about those who die, especially when they suffered so much in the concentration camps and had seen so much suffering in their own lives, we want to eulogize them, talk about what was good and blessed in their lives; but my mother wasn’t the kind of person who would want us to turn from the truth.  And the truth here was that her experiences and her suffering made her hard and made her cold.  I sometimes think that she may have survived the war but what she left back in the camps was her heart.

Here’s a poem I wrote about her:

My book Lighting and Ashes tells the story of my parents.  You can also read some other blogs about my mom and dad:

An earlier post about the day my mom died.

Posted by John Guzlowski at 6:40 AM 7 comments: