When I was a child growing up in Chicago, All Souls Day wasn't a big deal. My parents would tell me stories about what it was like in Poland when they were kids.

People, my mother would say, would walk to the cemeteries where their mothers and fathers, sisters and brothers, were buried and leave fall flowers and lighted candles there. Some times at night, there would be so many candles burning on and near the graves that you could see the light shining above the cemeteries as you walked back home, even if your home was far away.

But we didn't do that in America. We were Displaced Persons, immigrants, and all our dead were buried far away in Poland. My mother didn't even know where her mother and her sister and her sister's baby were buried. The men who killed them put my mother on a boxcar and sent her to the slave labor camps in Germany before she could bury her family. It was a bad time.

A little while ago, the Polish-American poet Oriana Ivy sent me a poem about All Souls Day, and she said it would be okay to share it with people.


Sometimes I think Warsaw fog
is the dead, come back

to seek their old homes –
wanting to touch even the walls.

But they cannot find those walls,
so they embrace the trees instead,

lindens and enduring chestnuts.
They embrace the whole city, lay

their arms around the bridges
and the droplet-beaded street lamps;

they pray in the Square of Three Crosses,
kneel among the candles and flowers

under bronze plaques that say
On this spot, 100 people were shot –

they bow, they kiss
even the railroad tracks –

they do not complain, only hold
what they can, in unraveling white.

If you want to read more of Oriana's poems, she has a new book out called April Snow, the winner of the New Women's Voice Poetry Award.  Some of her poems are available online at the journal qarttsiluni. She blogs about life and poetry at Oriana Poetry.

If you want to know more about Polish and Polish-American All Souls Day, Deacon Konicki's blog has a post about the way it is celebrated in Poland and Robert Strybel has a piece on the way the day is commemorated by Polish-Americans in the US.

By the way, the Polish-American community in Buffalo, NY, has organized an All Souls Day commemoration. There's an article about it in the Polish News.

The photo is of an All Souls Day commemoration in Poland.
Posted by John Guzlowski at 7:14 AM 6 comments: 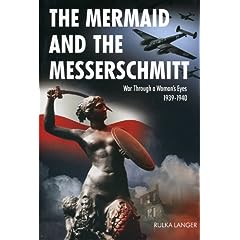 I've been looking forward to this memoir by Rulka Langer for a very long time. It's the first publication of Aquila Polonica, a new press started by Terry Tegnazian and Stefan Mucha dedicated to publishing works about the Polish World War II experience in English. The press hopes to publish firsthand accounts, memoirs, poetry, literature, photographs, artwork and historical studies. Terry Tegnazian has written that what inspires her is Poland's role in World War II. It is, she says, "possibly the most heroic and tragic of all the Allies, yet remains one of the least-known aspects of WWII to those living in the West. It is our mission to bring this amazing story to the wider English-speaking world."

Aquila Polonica's The Mermaid and the Messerschmitt: War Through a Woman’s Eyes, 1939-1940 is a rare eyewitness account of the first six months of WWII – the Nazi German invasion of Poland, the Siege of Warsaw, and the first months of the Nazi occupation – written by Rulka Langer, a civilian, a young Polish career woman and mother, who was a graduate of Vassar College in the U.S.

Her story is enhanced by the historic photographs, documents, and maps that the publishers have gathered together especially for this volume.

The book has been chosen as a selection of the Book-of-the-Month Club, the History Book Club, and the Military Book Club, and is endorsed by Dr. Zbigniew Brzezinski. Publishers Weekly calls it “an unusual take on WWII.”

The recently retired head of the Los Angeles Public Library system read it and says: “I couldn’t put the book down. Her story is riveting … utterly contemporary and compelling.”

The Mermaid is available in hardcover at your local bookstore (if it’s not in stock, they can order it for you), or online at Amazon.com.
Posted by John Guzlowski at 4:19 PM 4 comments: