In the 50s, when I was a child growing up around Humboldt Park in Chicago, the biggest non-religious holiday was not Halloween or the 4 of July or Memorial Day. It was always May 3, Polish Constitution Day, Trzeciego Maja. My family would start preparing weeks ahead of time, cleaning the house, sprucing up what needed to be painted, sanded, or nailed, making sure we would have the food and drink we'd need for all of our guests.

We lived only about a half a block from the park where every year Poles celebrated the 3rd of May, and we knew that there would be dozens and dozens of our Polish friends stopping by to help us celebrate after the big parade in the park and all of the speeches by local and national politicians.

This holiday was important not just because it gave Polish friends a chance to celebrate the way they did in the Old Country, but because it re-affirmed a promise they had made to each other and to Poland. They had promised never to forget Poland, never to give up fighting for her freedom.

Poland had also made a promise to them, and the 3rd of May was the day when she re-affirmed her promise. She promised that despite all the chains that she was shackled by, all the foreign armies that occupied her and raped her and spat on her, she would remain the country of their dreams and hopes forever.

Shortly after he died, I wrote a poem about the 3rd of May and what that date meant to him. It's called "Poland."

They’ll never see it again, these old Poles
with their dreams of Poland. My father
told me when I was a boy that those who tried
in ‘45 were turned back at the borders

by shoeless Russians dressed in rags and riding
shaggy ponies. The Poles fled through the woods,
the unlucky ones left behind, dead
or what’s worse wounded, the lucky ones

to Poznan or Katowice. But God
wasn’t listening or His hands were busy
somewhere else. Later, in America
these Poles gathered with their brothers

and with their precious sons and daughters
every May 3, Polish Constitution Day,
to pray for the flag. There was no question
then what the colors stood for, red for all

that bleeding sorrow, white for innocence.
And always the old songs telling the world
Poland would never fall so long as poppies
flower red, and flesh can conquer rock or steel.

-- from Lightning and Ashes
. 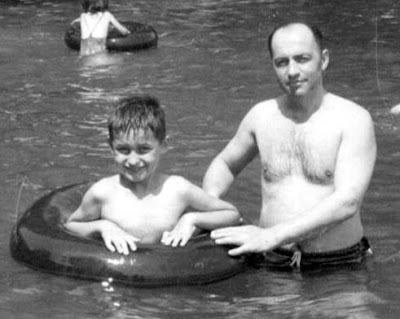 PS: If you want to read some of the history behind May 3rd, Polish Constitution Day, you can check out a brief article in Polonia Today.
Posted by John Guzlowski at 2:02 PM 3 comments: