The Men From the East Were Terrible

70 years ago today the Soviet Union invaded Poland from the east and divided up the country with the Nazis. In some places in Poland, they light candles and put them in the windows to remember the dead and the suffering of the living during that time.

My mother was living west of Lvov in eastern Poland when the Russians invaded. I once asked her what that time was like. She said, "The men from the east were terrible--like buffaloes."

Tonight in Danville, Virginia, where I live, I will light a candle.

Waiting to Be Heard: The Polish Christian Experience Under Nazi and Stalinist Oppression 1939-1955 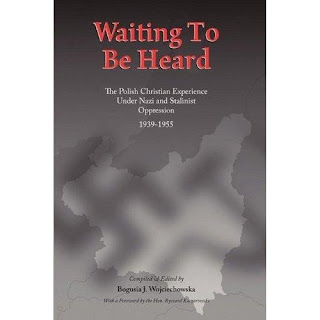 I first met Dr. Bogusia Wojciechowska over the internet about five years ago. Someone sent me a note about her and her work, and I got in touch with her as soon as I read it.

She was working on an extensive research project to document the lives of Poles who were forced to leave Poland during World War II. This was a project that touched me directly. For years, I've try to find books that would tell me more about what happened to people like my parents who had been rounded up by the Germans and taken to the slave labor and concentration camps in Germany. What I found surprised me. Beyond Richard C. Lukas's excellent Forgotten Holocaust there weren't many such books, and his book in fact didn't tell me what I wanted to know about the lives of the Poles who were taken to German and those -- like my Uncle Jan -- who were taken to Siberia.

It seemed that what my mom once said was true. They don't make books about people like us.

Dr. Wojciechowska's project has attempted to change that. Over the years, as a historian, she devoted herself to chronicling the experiences of those who were forced to leave Poland. Her website -- The Polish Diaspora -- has been an essential source of information about those experiences. Now, she has edited a book that brings together much of her research about the lives of those who were taken from Poland during the war.

The book is called Waiting to Be Heard: The Polish Christian Experience Under Nazi and Stalinist Oppression 1939-1955 .

If my mom were to see this book, she would probably say, "At last, here's a start."

Here's a press release from the publisher of Waiting to Be Heard:

All wars disrupt; they leave behind the dead and the living, the victims and the survivors. The war that tore apart Poland in 1939 with Hitler’s avowed annihilation of an eastern neighbor "for German expansion", Stalin’s westward thrust with Soviet communism and the mass deportation to Siberia of whole societies, all ensured that while millions died, those who survived could not or would not speak of their ordeal. Theirs was the story of deprivation and of humiliation; it was the realization that not only was a homeland lost, but that an entire future was denied.

Waiting To Be Heard (The Polish Christian Experience Under Nazi and Stalinist Oppression 1939-1955) is an attempt to give voice to those who, in fear of their lives or in anticipation of an eventual and triumphant return, found themselves exiled across the world. Dr. Bogusia Wojciechowska, the daughter of a couple that found refuge in a camp outside Oxford, England, and now Dean at Bunker Hill Community College in Boston MA, had an incomplete picture of her family’s plight until she chanced upon some letters written by her grandfather. Her training as a historian gave her the confidence and the methodology to conduct over one hundred interviews with a rapidly decreasing population that had first-hand experience of both Nazi and Stalinist oppression. In the majority of cases these interviews were the first time this diaspora had spoken at length about their suffering and their determination to secure freedom for their homeland.

Presented as a series of vignettes, Waiting to Be Heard is a chronology punctuated by the poetry of a subsequent generation that includes Martin Stepek, John Guzlowski, and Hania Kaczanowska, each of whom pay respectful and heart-rending homage to the dignity of their parents. This 400-page book contains many photographs and artifacts, and has a foreword by Ryszard Kaczorowski, former president of the Polish Government-in-Exile in London who, in 1990, was finally able to hand over the safeguarded State Insignia to the newly and democratically-elected president, Lech Walesa, in Warszawa.

Published this September, by AuthorHouse, Waiting To Be Heard is printed to order, so wait times may vary. Please order through Amazon, and Barnes & Noble websites, or through your local bookstore. Meanwhile, one can get a feel for the content by visiting www.PolishDiaspora.com. The ISBN is 978-1-4490-1370-7

For additional information, write to: WaitingToBeHeard(at)comcast.net -- substitue @ for (at).
Posted by John Guzlowski at 3:42 AM No comments: 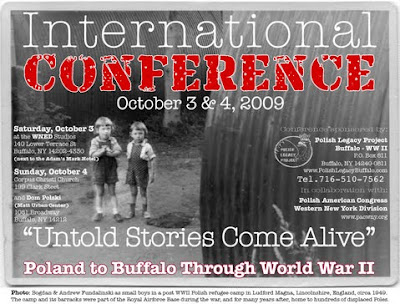 I recently received the following information regarding the upcoming conference (Oct. 3-4) sponsored by the Andy Golebiowski and the Polish Legacy Project of Buffalo, NY:

This year marks the 70th anniversary of the invasion of Poland by Nazi Germany and the Soviet Union; the start of WWII. The war exacted an enormous physical and human toll. Apart from the millions of dead, millions others became displaced from their homes. Many of these displaced persons found a home outside of their homeland, in England, Australia and North America, in places like Toronto and Buffalo. Since settling here, these immigrants quietly built new lives, worked hard and generally kept silent about what they had experienced.

Conscious of the fact that many of the survivors have died, taking their stories to their graves forever, the Polish Legacy Project in Buffalo-WWII was formed with the aim of documenting the stories of those who are still among us. Feeling a sense of urgency, we have set out to capture these stories in order to share them with the community at large.

The conference is the beginning of a larger project aimed at documenting Polish stories of wartime survival.

For more information, including registration forms, conference schedule, and list of speakers, please refer to the Polish Legacy Project website.
Posted by John Guzlowski at 10:48 AM No comments: