Call for Submissions: Poems on Dreams and Dreamers and Dreaming

I am looking for poems for an online mini-anthology of poems about dreaming and dreams.

They will appear in Scream Online, an online arts/culture/literature journal that gets about 50,000 hits a month.

Here's a link to the most recent mini-anthology: Heaven and Hell: 48 Poems by 37 Poets.

What I'm looking for are poems talking about what you think about dreams or dreaming.  The poems can be previously published or unpublished.  Short prose pieces (prose poems?) would also work.

The deadline for submissions is August 1, 2015.

Send your poems to John Guzlowski at jzguzlowski (at) gmail.com

Looking forward to hearing from you.
Posted by John Guzlowski at 5:29 AM No comments:

Me and Charles Simic: A Couple of Refugee Poets

I got an email yesterday from a friend. He asked me what I thought about Charles Simic. He's a poet that some of you might have heard of. He was the poet laureate of the US a couple of years ago. I think my friend was asking me about him because he figured that Charles Simic and I shared some history. We both came to the US after the war as Displaced Persons, refugees.

My friend's question got me thinking. I wonder how old Simic was when he came here to America, Chicago. I think he was older than I was--he was born before the war and he probably remembers a lot of it. I was born in 1948 and remember only the DP camps and what I heard my parents and their friends talking about. In one of the official biographies, it says Simic's life was "complicated by the events of World War II." I like the way that makes the war sound like something no more important than static on your radio, a couple hours without internet.

I doubt he ever read my poems, but I've read a lot of his.

His poems to me feel European, existential, surreal, funny in a really dark way. Maybe it's because of the different ways we learned our English. I learned it from the ground up starting when I came over when I was three. Coming to the states when he was in his teens, he probablly learned his English from the middle up (and down), and so the words he knows are the words for little plain things and big ideas, frightening and foreign even though they are a lot of times our own.


In his fear of solitude, he made us.
Fearing eternity, he gave us time.
I hear his white cane thumping
Up and down the hall.

I expect neighbors to complain, but no.
The little girl who sobbed
When her daddy crawled into her bed
Is quiet now.

It's quarter to two.
On this street of darkened pawnshops,
Welfare hotels and tenements,
One or two ragged puppets are awake. 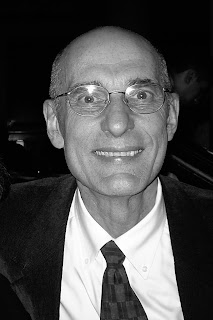 Here's a poem I wrote called "A Dog Will." It recently was published in The Convergence Review.

A dog will
eat a dog

and a dog will
eat a man

and a man will
eat a dog

and a man will
eat a man

and a man will eat
his own father

sister and brother
even the mother

who fed him
milk at her breast

even though
every rule

of his church
and his people

tells him not to
if he is hungry

If you want to see a youtube of me reading at St. Francis College in Brooklyn, NYC, just click here.
Posted by John Guzlowski at 10:23 AM No comments: 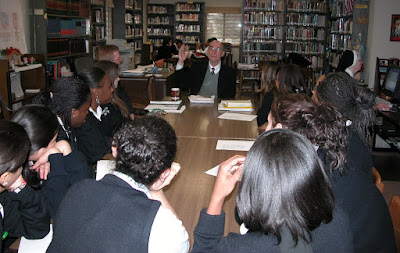 At a reading of poems from my book Lightning and Ashes, I read the ones about my father’s faith and my mother’s loss of faith, and some school children in the audience ask me if I believe, and I don’t know what to say.

I don’t believe of course, but it’s not easy standing up and saying that I don’t have any faith, that God is not in my heart, that all their dreams of Heaven and salvation and the final reunions with their mothers and fathers in some blessed place beyond time is lost on me.  Especially to kids.

How can I say to them that, for me, when Jesus died he died.

I try to find something that will soothe the school children, speak to them, give them some hope in hope, but what can I tell them?

Can I give them something from Emerson or Whitman? Call I tell them, “That heaven walks among us”? Or that what “is really Me shall live just as much as before”?

I can’t tell them what I can’t tell them, and instead I tell another story, about how I told my wife I didn’t believe in anything and she looked at me and said, “You’re kidding yourself. You’re the most spiritual person I know.”
Posted by John Guzlowski at 7:09 AM No comments: