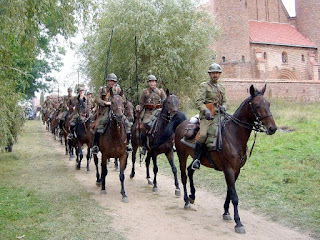 73 years ago on September 1. 1939, the Germans invaded Poland. Their blitzkrieg, their lightning war, came from the air and the sea and the sky. By Sept 28, Warsaw, the capital city of Poland, gave up. By October 7, the last Polish resistance inside Poland ended.  In the six years that followed, more than five million Poles died.

A couple years ago, I received an email from a friend passing on some links to US Army films of the invasion of Poland that were compiled from captured German films. I thought I would share these films of what the Blitzkrieg was like. They are in 3 parts (each about six minutes); and if you click on the part you want to see, you will be taken to the appropriate site.

Invasion of Poland, Part I

The world had not seen anything like it, and it was the prelude to a lot of things the world had never seen before: the Final Solution, Total War, the concentration camps, the atomic bomb, the fire bombing of civilian populations, and brutality on a level that most people still don't want to think about almost 70 years later.

When the Germans attacked on that September 1, My dad was 19 and working on his uncle's farm with his brother Roman. Their parents had died when the boys were young, and their uncle and aunt took them in and taught them how to farm, how to prepare the soil in the fall and plant the seeds in the spring. My mom was 17 and living with her parents and her sisters and brothers in a forest west of Lvov in eastern Poland.

The summer had been hot and dry, and both of my parents, like so many other Poles, were looking forward to the fall and the beginning of milder weather.

The war turned my parents' lives upside down. Nothing they planned or anticipated could have prepared them for what happened.

By the end of the war, they were both slave laborers in Nazi Germany, their homes destroyed, their families dead or scattered, their country taken over by the Soviet Union.

I've written a number of poems about the first days of the war and what happened to Poland, but none of those poems ever captured, I felt, the struggle of the Polish people to throw off the Nazi invasion.

A couple of years ago, I tried again to describe what my parents and the Poles of their generation felt. Here's the poem:

War comes down like a hammer, heavy and hard
flattening the earth and killing the soft things:
horses and children, flowers and hope, love
and the smell of the farmers’earth, the coolness
of the creek, the look of trees as they uncurl
their leaves in late March and early April.
You smell the horses before you see them.

Horses groan, their heads nailed to the ground
their bodies rocking crazily, groaning
like men trying to lift their heads for one
last breath, to breathe, to force cold air
into their shredded, burning lungs.
For these horses and the men who rode them,
this world will never again be the world
God made; and still they dare to raise their heads,
to force the air into their shredded lungs.

Look at this horse. Its head torn from its body
by a shell. So much blood will teach you more
about the world than all the books in it.
This horse’s head will remake the world for you—
teach even God a lesson about the stones
that wait to rise in our hearts, cold and hard.

In the end Hitler sat in his cold bunker
and asked his generals about his own horses,
“Where are they?” He asked, “Where are my horses?”
And no one dared to tell him, “They are dead
in the fields with the Poles and their horses,
bloated with death and burning with our corpses.”

This poem originally appeared in War, Literature, and the Arts along with several other poems I wrote about Poland and the war. Here's a link to those poems. Click here.

The photograph of re-enactors in 1939 uniforms was taken by Mr. Mazowieckie at a re-enactment of the Bzura River Battle.
Posted by John Guzlowski at 1:00 PM No comments: