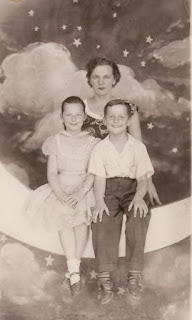 When she was seventy-eight years old
and the angel of death called to her
and told her the vaginal bleeding
that had been starting and stopping
like a crazy menopausal period
was ovarian cancer, she said to him,
“Listen Doctor, I don’t have to tell you
your job. If it’s cancer it’s cancer.
If you got to cut it out, you got to.”

After surgery, in the convalescent home
among the old men crying for their mothers,
and the silent roommates waiting for death,
she called me over to see her wound,
stapled and stitched, fourteen raw inches
from below her breasts to below her navel.
And when I said, “Mom, I don’t want to see it,”

She said, “Johnny, don’t be such a baby.”
Eight months later, at the end of her chemo,
my mother knows why the old men cry.
A few wiry strands of hair on her head,
her hands so weak she can’t hold a cup,
her legs swollen and blotched with blue lesions,
she says, “I’ll get better. After his chemo,
Pauline’s second husband had ten more years.
He was golfing and breaking down doors
when he died of a heart attack at ninety.”

Then my mom’s eyes lock on mine, and she says,
“You know, optimism is a crazy man’s mother.”
And she laughs.
———
From my book about my mom and dad and the people they were through war and misery and love.
Echoes of Tattered Tongues.
Posted by John Guzlowski at 9:23 AM No comments:

Here’s my latest column for Chicago’s Polish paper Dziennik Zwiazkowy. The column talks about the importance of May 3rd to Poles when I was kid growing up. Please feel free to share and leave a comment at the paper’s website. The link appears below.
MAY 3rd — POLISH CONSTITUTION DAY
In the 50s, when I was a child growing up around Humboldt Park in Chicago, the biggest non-religious holiday was not Halloween or the 4 of July or Memorial Day or Labor Day. It was always May 3, Polish Constitution Day, Trzeciego Maja, the day Poles celebrated their Constitution, the second one in the world.
My family would start preparing weeks ahead of time, cleaning the house, sprucing up what needed to be painted, sanded, or nailed, making sure we would have the food and drinks we’d need for all of our guests.
We lived only about a half a block from the park where every year Poles celebrated the 3rd of May, and we knew that there would be dozens and dozens of our Polish friends stopping by to help us celebrate after the big parade in the park and all of the speeches by local and national politicians.
This holiday was important not just because it gave Polish friends a chance to celebrate the way they did in the Old Country, but because it re-affirmed a promise they had made to each other and to Poland. They had promised never to forget Poland, never to give up fighting for her freedom.
Poland had also made a promise to them, and the 3rd of May was the day when she re-affirmed her promise. She promised that despite all the chains that she was shackled by, all the foreign armies that occupied her and raped her and spat on her, she would remain the country of their dreams and hopes forever.
This was one of the things my dad taught me, the sacredness of the 3rd of May, and the sacredness of this promise.
Shortly after he died, I wrote a poem about the 3rd of May and what that date meant to him. It’s called „Poland.” The poem is about what Poland meant to him, a young man who was taken to the slave labor camps in Germany and was never able to go back to the Poland he loved.
Poland
They’ll never see it again, these old Poles
with their dreams of Poland. My father
told me when I was a boy that those who tried
in ‘45 were turned back at the borders
by shoeless Russians dressed in rags and riding
shaggy ponies. The Poles fled through the woods,
the unlucky ones left behind, dead
or what’s worse wounded, the lucky ones
gone back to wait in the old barracks
in the concentration and labor camps
in Gatersleben or Wildflecken
for some miracle that would return them
to Poznan or Katowice. But God
wasn’t listening or His hands were busy
somewhere else. Later, in America
these Poles gathered with their brothers
and with their precious sons and daughters
every May 3, Polish Constitution Day,
to pray for the flag. There was no question
then what the colors stood for, red for all
that bleeding sorrow, white for innocence.
And always the old songs telling the world
Poland would never fall so long as poppies
flower red, and flesh can conquer rock or steel.
— (the poem is from my book about my parents Echoes of Tattered Tongues: Memory Unfolded)
http://dziennikzwiazkowy.com/guzlowski/parada-trzeciomajowa-may-3rd-polish-constitution-day/
.
Posted by John Guzlowski at 12:18 PM No comments:

CAT IN THE SEWER

Cat in the Sewer

Our cat Lydia was a stay at home cat for a long, long time. When we would open the door, she’d just sit there in the living room or at the back door and sniff the air. Nothing more than that. She would just sniff until the door closed. She didn’t seem interested in going out at all.

All that changed about 5 months ago.

When my wife Linda opened the door one morning last fall, Lydia didn’t just sniff the air. She hopped up and walked straight out into it. Linda and I shouted for her to come back, but she wouldn’t.

What we were worried about was the wildlife in the neighborhood. You see, we live in a wooded area in Virginia, just south of the Blue Ridge Mountains. This place is crawling with deer and bear and coyotes and dogs. Now I’ve never seen any of the bears, but I’ve seen all of the other animals in the neighborhood – especially the dogs. It’s like everybody in the area is afraid of the bears and coyotes and deer, so they keep dogs around — big, mean, barking, cat-eating dogs.

And when Lydia ran out into the yard, we were afraid that some dog would chew her up.

It didn’t happen of course. About 15 minutes later, she came home and everything was fine. In fact, it was so fine we started letting her go out 3 or 4 times a day. She’d leave, sniff around, chase her tail and come back in about 5 minutes. No worries.

No worries, of course, until last week Wednesday.

Linda let Lydia the cat out for her usual late evening romp, but she didn’t come back. An hour went by and then another.

My wife was sure something had happened to Lydia. I tried to re-assure her that the cat would come back. I told her in fact I would get up out of bed periodically during the night and check to see if she was at the backdoor scratching.

We waited for two more nights for the cat, and it looked like she was never coming back.

The cat was clearly gone for good.

I’m a guy, and I took this news with a shrug, but my wife? It about broke her heart. It was like her baby had disappeared into the darkness of the Blue Ridge Mountains. And my wife blamed herself because she was the one who opened the door and let Lydia out that night when she disappeared.

Last Saturday, our daughter Lillian came over to do some laundry at our house because her washing machine was busted, and she walked in with a laundry basket full of dirty clothes. She set it down and said, “I just saw something weird a couple doors down. A woman was lying in the street next to the sewer grate. Another woman was sitting next to her. I’m going to see what’s going on.”

A woman lying in the street? Maybe this happens all the time in a city like Chicago where I grew up, but here in Lynchburg it doesn’t happen ever, so my wife followed Lillian out.

Took me a while to get to the street because I couldn’t find my shoes, but when I got to the sewer grate, one of the women was dropping cat treats from a back down into the sewer, and my wife Linda and Lillian were talking into it.

I couldn’t believe it.

Lydia the cat was down in the sewer, about 10 feet down, looking up out of the darkness and saying, “Meow… meow.”

I knew what I had to do. I tried to lift the sewer grate, but the thing wouldn’t budge. It must have weighed a 100 pounds. It just felt like it was bolted into place.

I turned to my wife and said, “Keep talking to Lydia, don’t let her slink deeper into the sewer. I’ll see if I can get somebody to help us get Lydia out of the sewer.”

I got back to the house and started calling.

Shaking my head, I figured I better get back out to the street and the sewer, and tell my wife and daughter the bad news. There was no help for Lydia, no way to get her out of that sewer dungeon she was stuck in.

But as soon as I opened my front door and stepped outside, I saw a police car, and my wife and daughter were standing next to the sewer hole. I ran up to them and looked down into the hole. There was a woman police officer climbing up out of the sewer with Lydia clawing into her shoulder like she was never going to let go.

What happened was that while I was wasting my time on the phone, Lillian called a friend of hers, a woman cop, and she came right over, and she and Lillian and Linda lifted the sewer grate that I couldn’t budge, and the police officer climbed down and got that silly cat.

I don’t know what the moral of this story is, but I do know that Lydia is never going outside again without a tight lease around her throat.

Posted by John Guzlowski at 12:20 PM No comments: