PLEA FROM A FEARFUL AMERICAN

Plea from a Fearful American

My latest column for the Dziennik Zwiazkowy, the Polish Daily, is about gun control and what it means to me.
At the paper's website the article first appears in Polish and then in English. Please drop a comment there. It tells the City Editor that I'm worth keeping around.
Now here's the article I wrote:
PLEA FROM A FEARFUL AMERICAN
In 2014, about 12,500 people were shot to death in the US. In 2015, the number was about 13,500, give or take a couple. In 2016, it was about 15,000. In 2017, about 15,600. Last year in 2018, it was 14,700.
The number seems to go up and down some, just a little. In the last fifty years, it’s been as low as 8,000 and as high as 20,000. Some of these deaths took place in mass shootings, about 300 a year, but that leaves about 12,000 or more a year are just plain ordinary shootings.
The numbers kind of get confusing and ultimately boring, but what seems to be awfully clear is that there apparently is a type of American who likes to kill people.
I grew up in a neighborhood in Chicago where a lot of those people who like to kill people lived. It was the area just east of Humboldt Park. Sometimes the newspapers and the reporters on the local news broadcasts back then called it Murdertown.
There was a lot of that going on. Murders I mean.
I had a school friend who was murdered by some gang guys. They shot him in the back of the head and put him in some garbage bags and left him in an abandoned apartment a couple doors away from my home. He was the only one of my friends who was killed. My parents, however, lost four friends over the years we lived in that neighborhood. Their friends just seemed to be the victims of average sorts of murders. A couple of people even died on the sidewalk in front of my house. (The cops told me to just move along and stop staring.)
All that was back in the 1950s and 1960s in Chicago, and if the newspapers are to be believed it’s not that much different now. Even here in Lynchburg, Virginia, where I live, you hear about Chicago on the news, especially after a bad weekend where maybe 70 people are shot and 12 of that number are shot fatally.
Yeah, there was a lot of killing in my neighborhood. And a lot of fear there too. When we could, we finally left. We moved into a bungalow north of Diversey, just east of Oak Park Boulevard. It was a nice place. We were able to sit on the front porch in the new neighborhood and not fear getting shot.
As the type of American who is generally still fearful, I would like it made as difficult as possible for those other Americans to kill me or other people. You can understand my fear. I sometimes think it’s easier to buy a gun in America than it is to get a driver’s license. I just want it to be as hard to shoot someone to death as it is to drive a car.
So, if you know a politician, please pass my concern onto him or her.
Thank you.
________

Here's the link to the article: Just click here.
Posted by John Guzlowski at 12:59 PM No comments: 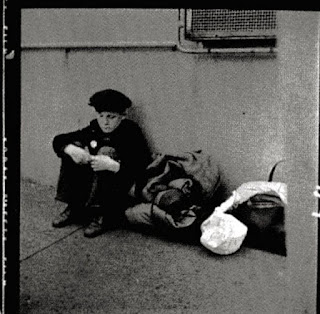 Here’s my latest column from Dziennik Zwiazkowy, the Polish Daily News.  It’s about the people who helped us when we first came to America as refugees in 1951.

Please leave a comment at the paper if you like the piece.  The link is below following the English version.  The Polish version is at the site.

To read more about our experiences as refugees please see my book Echoes of Tattered Tongues.

When we first arrived in Chicago in 1952, we were lost. My family had spent 6 years in the DP camps in Germany after the war and another year outside of Buffalo, NY, working for a farmer who paid our passage over to America.

But now we were in Chicago, and we were lost. We had nothing, just the things we brought with us from Germany. I remember years later asking my mother what we had brought to America in the wooden trunk my father built. She shrugged and went through the list: some plates, a crucifix, a wooden comb, some goose down pillows, a frying pan, and letters from a friend in America.

In Chicago we lived in dark rooms in small apartments in that we shared sometimes with two or three other DP families from the camps in Germany.  We were all people who had lost so much and had left so much behind, our mothers and fathers, our grandparents, our brothers and sisters.

We were alone and didn’t know where anything in this new world was.  I remember one time my father was going out looking for a store where he could buy some Polish sausage, and my mom stopped him and said, ”Maybe they don’t have kielbasa here.”

I was 4 years old that first winter in America, and I remember staring out a window at the snow falling on the buses moving slowly up and down Milwaukee Avenue, and begging my father to take us back to the refugee camps in Germany. I said it was too hard for us here.

We were lost in America — but sometimes people helped us.
We didn’t know who they were or what their names were or why they helped us.  But they did.

I remember one time two women who came to our apartment. They didn’t speak Polish, and the only English my parents knew was “Thank you, Missus.” These two women came and brought a dress for my mother, rubber boots for my dad, cans of pork and beans and loaves of bread for all of us, and for my sister and me, they brought some comic books, a hard rubber toy, a doll and a red truck with a missing tire.

We didn’t know who these two women were or how they found us. We didn’t even know their real names, so we gave them names. We called one woman “dobra,” and the other one “fajna.”

We knew what these two words meant.

These were “good” and “fine” women.

Here's the link to the Dziennik Zwiazkowy site where the article appeared
http://dziennikzwiazkowy.com/guzlowski/dobroczynnosc-w-ameryce-charity-in-america/
Posted by John Guzlowski at 8:03 AM No comments:

I'm always writing.  24 hours a day I got my antenna up waiting to hear from the muse.

Most of the time the signal is weak, creaky.

But sometimes it's perfect.

Either way, I write it down.

And what happens is that I have a house full of little sheets of paper.   Everywhere.

Sometimes I find one, and I say that's it. That's right and I put it in the pile of stuff I'm working on.

Sometimes I find one and wonder where it came from and where it's going.  I put it back where I found it.

Here's one of the poems I put back where I found it.

Hurry Home -- It's getting late

Black man came out of the dark woods
singing a song

Here's what they sang:

In Jerusalem they do
the hokey pokey
and they turn it all around
Posted by John Guzlowski at 3:37 AM No comments: