I recently received an email from the artist Carolyn Bardos. We were exchanging notes about my parents and their experiences in the war, and Ms. Bardos mentioned that she had seen Andrzej Wajda's motion picture KATYN in Budapest.

This is what she wrote:

What I recall so clearly is the audience, as the credits rolled, sitting in profound silence, until the crying started. A few people were standing, as if to leave, but they just stood. It was a small theater, and after the credits, the projectionist left off the lights to give the weeping audience time to dry our eyes, switch the cell phones back on, and walk back out into the city.


Please visit the website of The Katyn Memorial in Baltimore.


Last year at this time, I posted a blog about my father and what he told me about Katyn. I'm posting it again this year:


KATYN: THE FOREST OF DEATH 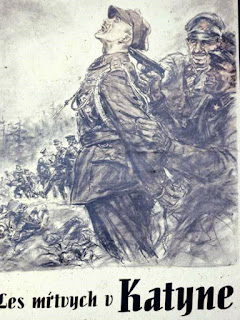 When I was a child, he told me a lot of stories about what happened in the war, about things that happened to my mother's family and his family and to Poland. One of the stories that he came back to repeatedly was about what happened in the Katyn Forest near the Russian town of Smolensk in 1940.
.
He told me about how the Soviets took 15,000-20,000 Polish Army officers and killed them. Nobody knows the number for certain.
.
My father used to say, "It's hard to count bones."
.
These soldiers were mainly reservists; that means they weren't professional soldiers, just civilian soldiers. In their daily lives, they were doctors and lawyers, teachers and priests. My father used to say that they were the future of Poland. He said that the Soviets didn't want Poland to have a future, so they took these doctors and lawyers, scientists and librarians and tied them up and blindfolded them and shot them in the back of the head. They were buried in mass graves.
One of the things he also told me was that people knew about this, countries likes the US and England knew about this, and nobody did anything about it. The Soviets, of course, denied it, and so did other countries. They didn't want to bring it up. I guess they figured what was the point of talking about massacres and genocide.
.
My father never wanted me to forget about Katyn.
Years ago, I wrote a poem about it for my book Lightning and Ashes, and I want to share the poem with you on this 68th anniversary of the Katyn Massacre.

KATYN
There are no Great Walls there,
No towers leaning or not leaning
Declaring some king's success
Or mocking another's failure,
No gleaming cathedral where you can
Pray for forgiveness or watch
The cycle of shadows play
Through the coolness of the day,
And soon not even the names
Of those who died will be remembered
(Names like Skrzypinski, Chmura,
Or Anthony Milczarek).
Their harsh voices and tearing courage
Are already lost in the wind,
.
But their true monuments
Will always be there, in the dust
And the gray ashes and the mounds
Settling over the bodies over which
No prayers were ever whispered,
No tears shed by a grieving mother
Or a trembling sister.