Is Old Age a Gift?

Is Old Age a Gift?

I got a message from a friend Barbara Pauls with a post that tried to make the case that old age is a gift.

I can't say I'm the same way I was when I was 20 but that's probably a good thing as you'll see if you read my forthcoming collection of poems True Confessions (Darkhouse Books)?

But is old age a gift?

If it is, it gets to be less so as you move on.  At least that's the way I see it from the people I saw aging.

My dad grew up on a farm and spent years in a concentration camp, and he was always working and laughing until his last years when he didn't have the strength to go into his garden and water the beautiful flowers he had planted in his home in Arizona.

My mom too felt her age.  At the end, when she was in her 80s, she couldn't stand up out of her wheelchair, and she didn't have the hope that had fueled her in the concentration camps and in the US when we came her as refugees.

I'm sure that this isn't the way age hits all of us, but this is what I saw in the aging people I loved the most.

Anyway, I sent my facebook friend  Barbara Pauls a note.  I said that finally all we can hope for is that old age is a gift and it lets us feel that gift for us long as it will.

And I sent her a link to a poem I wrote for the Atticus Review about why we age.  If you follow the link, you'll see the poem and you can hear me reading it in my not so old man's voice.

https://atticusreview.org/why-do-we-age/
.
.
Posted by John Guzlowski at 7:19 AM No comments:

A Story My Mother Heard in the Slave Labor Camp

A Story My Mother Heard In the Slave Labor Camp

They took me from my children, three little ones.

They said the children would be useless in the camps in Germany. They were too young to do anything but cry for food.

I begged the soldiers to let me take them with me. I said I’d care for them and do the work for all of us.  I even dropped on my knees and wept, clung to their boots, but they said no. I asked them who would feed them, and they said surely a neighbor would.

I couldn’t stop weeping, and they said if I didn’t, they would shoot the children.

So I left them behind in Dębno.
Posted by John Guzlowski at 2:12 PM No comments: 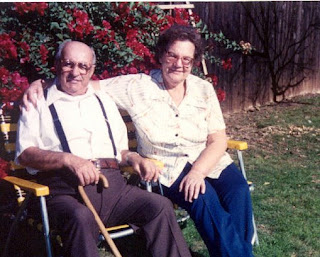 Don’t make eye contact
with the dead in their coffins.
They’ve suffered long enough,
walked too long upon the earth,

smelled its sweet air in the morning,
loved the people they’ve loved,
loved you as much as they could,
probably more than you guessed.

Now, it’s time to look away.
You don’t need to see their eyes
on you as you turn away,
their eyes watching as long

as they can, watching until
you turn into your own grave.

An audio of me reading this appears at 2River

Dead Deer in the Backyard

Dead Deer in the Backyard

I found a deer in the backyard today.  It was dead.

I had gone out to mow the back terrace, a section of the yard that slopes down to the next street, and there was this deer there.  I don't know if it was male or female, or how old it was.

There were lots of flies around its head, especially around its eyes.  I think the flies were trying to get to whatever moisture was still there in the deer's eyes.  I don't kow for sure.

It wasn't that big, but I didn't know how I was going to move it out of there.  For a moment, I thought about just covering it with leaves and letting it rot down there.  It was far enough from the house, and Linda and I didn't go down much to that part of the yard.

But then I thought I couldn't that.  Linda's parents are coming later this week for a visit, and I bet they would want to walk around the backyard.  The terraces there are beautiful.  They are handmade, boarded by stone, and flowers whose names I don't know are everywhere.

So I knew I had to get the deer out of there.  I grabbed its front legs and pulled it.  It wasn't big but even a small deer weighs enough to slow a guy down, and I just turned 69.  I got it up half way to the first of the three terraces, and I knew I couldn't drag it any further.  I was covered with sweat by then, and the flies buzzing around the deer were all around me too.

So I walked to the shed up by the house, and I got the wheelbarrow and brought it down.  It wasn't easy getting the deer in the wheelbarrow.  Dead weight.  You know what that means.

It was slow work but I managed it.  I pushed the thing up the slope, up the terraces with their beautiful flowers.

It wasn't easy, but it wasn't hard either.  The wheelbarrow was sort of balanced.  The deer was small but it filled that wheelbarrow.  The head and most of the neck, the front legs and the back legs -- all of that was outside, balancing the wheelbarrow so even an old man could push the thing and the dead deer in it up a slope to the street.

What did I think about as I pushed the thing up the hill?

About Bill Stafford's poem about finding a dead deer on a road at night.  About how the hell he was able to drag that deer off to the side of the road so nobody would run into it.

About another poem, William Carlos Williams' poem about how so much depends upon a wheelbarrow.

Why did I think about them?

I thought about them, so I wouldn't have to think about this dead deer in my backyard and how she died and whether her dying would touch any one except me.
Posted by John Guzlowski at 12:18 PM No comments: