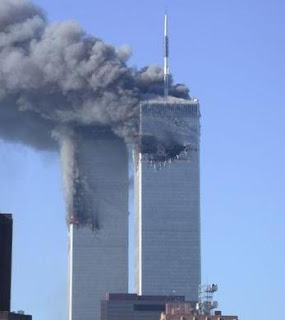 One of the things that the past teaches us is that there is really no end to the past. I saw this in my parents. For them World War II never ended -- even after liberation, even after forty, even after fifty years. The war and the camps my parents suffered in were always there. A snowy day in November would put my mom back in the frozen beet fields that the German guards forced her to work in that first winter in Germany. A TV show as harmless as Hogan's Heroes would leave my father shaking.

I've seen this in other survivors and veterans, and I'm sure you have too.

What the war taught them was that war has no beginning and no end.

It's the same for a lot of us with 9/11. We want it to have an end. We want what people call closure. We want to get beyond what happened.

We've been fighting the War on Terrorism for 10 years in Iraq and Afghanistan, the Islamic world is changing rapidly where ever we look, and we've killed Osama bin Laden. So why does 9/11 still feel like it happened yesterday? Why does a film clip of a plane crashing into one of the Twin Towers stop us? Why does a voice recording of a stewardess on that plane talking to ground control about not being able to open the door to the cockpit bring us to tears?

We want an end, and we've wanted it for ten years, and it hasn't happened, and it never will. That's one of the things that 9/11 has taught us.

I've written a number of poems about 9/11 over the years. The first one was written a couple days of 9/11. That poem talked about how I wanted an end to 9/11. It didn't happen then, and it hasn't happened since.

I want to come home
and turn on the evening news
and not see bin Laden,
his terrible lightning
piercing the sky
and showering clouds
of metal down on the streets
I want to say to my wife,
Linda, do you think
it will rain tomorrow?
If it doesn’t, maybe we can
plant those mums in the garden
to replace the verbena
that have been struggling
all summer with the heat,
the sun drying them
to brown slivers, nothing
red or green about them
And I want her to say,
if it rains let’s go to the bookstore
and have a cup of Starbucks
and read some travel books
and talk about where we’ll go
when Lillian comes home
during Christmas break
She’ll need something
to take her mind off
her first year of law school