66 years ago today, Adolf Hitler committed suicide. Some historians say he killed himself with a cyanide capsule, others say he shot himself first. 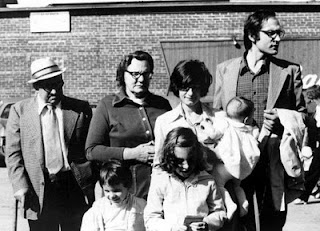 My mother didn't know how he killed himself, and she didn't much care. She was happy that he did it.

She had never met him, but she had felt his fist across her face, his whip across her back. She was taken to Germany as a slave laborer after watching her mother, her sister Genja, and Genja's baby daughter murdered. My mom's sister Sophie was raped too. My mom escaped by jumping through the window and escaping into a forest. The Nazis caught her pretty soon after that.

My mother didn't talk much about what happened to her and her family. When I was a kid, I thought her silence came from annoyance with my questions about the war. Later, I realized that she didn't talk about her experiences because she wanted to protect me from the terrible things that happened, even though I was a grown man and a teacher.

Here's a poem I wrote about what Hitler did to my mom and her family.

That’s the kind they were

Let me tell you:
God doesn’t give
you any favors

The poem first appeared in the Chattahoochee Review.

The photo was taken by my wife Linda in 1979 or so. From left to right in the back row, it's my dad, my mom, my sister Donnna, her daughter Denise, and me. In the front row are my sister's daughters Kathie and Cheryl.

To read other poems about my mom, check out The Guzlowski Sampler, a site set up at Eastern Illinois University, where I taught.
Posted by John Guzlowski at 4:19 PM 4 comments: