I wrote this poem about 30 years ago.  We were living in Charleston, Illinois, and I was teaching at Eastern Illinois University.  We had bought a house that was part of a development built in an old corn field.  It was flat and the earth there was pretty much used up through generations of farming. Nonetheless, Linda and I tried to grow trees and roses and flowers and tomatoes and such.  Pretty much unsuccessfully.  Here'a a poem from that time.
A Birch Tree Dying in Illinois
If this were New Hampshire
and I were Robert Frost
this death would go unnoticed

I'd measure a wall
and worry about the mail

my daughter would circle
a pine, draw up before it
and measure herself and it

But this is Illinois
and on the lawn the birch
tree is dying, its grey
bark reddens, deepens
toward death, the dry buds
powder between my fingers
and a living birch
is as scarce as glory.
Posted by John Guzlowski at 12:31 PM 1 comment: 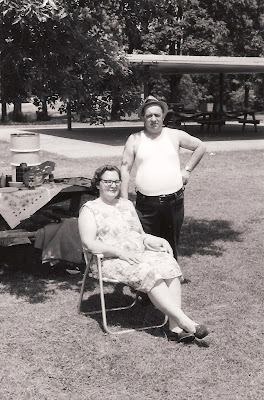 I've been writing poems for about 37 years now.  I started when I was in grad school working on my Ph.D.  It was a hot, humid August afternoon, and I was sitting at a desk thinking about Faulkner, trying to make sense of a line of imagery that seemed to thread through all of his novels.

I wasn't having any luck.

Out of nowhere, I had this sense of my parents and where they were and what they were doing.  It came as a shock this sense.  I hadn't  lived at home in almost a decade, seldom saw my parents, tried in fact not to think about them and their lives.  I didn't want to know about their worries, their memories of WWII and the mess those memories were making of their lives.   But suddenly there they were in my head, and for some reason I started writing about them.

I hadn't written a poem in at least a decade either, but there suddenly I was writing a poem. And it wasn't the last. This poem about my parents started me writing poems again, and I've never stopped.

Somewhere my parents
are still survivors
living unhurried lives
of unhurried memories:
the unclean sweep of a bayonet
through a young girl's breast,
a body drooping over a rail fence,
the charred lips of the captain of lancers
whispering and steaming
"Where are the horses
where are the horses?"

The poem appeared in Lightning and Ashes.
Posted by John Guzlowski at 4:22 PM 1 comment: 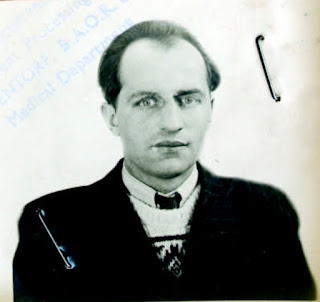 Dean Pasch Patty Dickson Pieczka and Maja Trochimczyk have each tagged me to do the 5 poems in 5 days thing.
As I understand it, this means I'll be posting a poem a day for 5 days. Then I'll find someone and tag her to do 5 poems in 5 days, and on and on until the whole internet is nothing but poems and ads for James Patterson's writing workshop!
Here's the first poem. It's one that Maja Trochimczyk published in her wonderful anthology of poems about Chopin (Cherries with Chopin: A Tribute in Verse, available at Amazon).
The poem is about my dad and his love of Chopin. My dad had literally no education. He was an orphan from the age of 5 and grew up on his uncle's farm in Poland. His uncle never let him attend school, and as a result my dad had no schooling, was never introduced as a child to any kind of culture. He didn't know anything about books or art or music.
But in the concentration camp, he met professors, musicians, and artists, and one of the things they told him about was Chopin. My dad loved to listen to Chopin. He felt that he and Chopin shared a soul.

My father says
in time he'll learn
to listen to the Polonaise
and not hear Sikorski
or Warsaw, the hollow surge
and dust of German tanks,

only Chopin,
his staff of clean notes
and precise legato.

His dreams will be
of crystalled trees,
papered gifts
in red half light,
the smell of warm sheds
and girls drawing milk
from waiting cows.

The snow will fall
and go unnoticed.

A Good Death first appeared in Lightning and Ashes, my book about my parents.
Posted by John Guzlowski at 7:47 AM 2 comments: