Brothers and Sisters from the Slave Camps 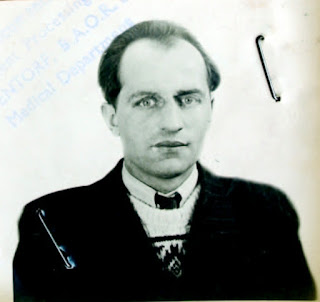 My father always talked about the men and women he was in the slave labor camps as his brothers and sisters. I remember once walking with him on a street in Chicago when he ran into of the men he had been with in Buchenwald. My dad threw his arms around him and hugged him and wept, whispering "my brother, my brother" as he cried. This is a short piece I wrote about his brothers and sisters from the camps.

The Despair of his Brothers and Sisters in the Slave Camps

Even though he had not known them before, they were his brothers and sisters now, brothers and sisters from towns whose names appeared on no maps, villages lost in the marshes of the east and the ravines of the south, men and women from cities who’d known food he couldn’t imagine: bread in the shape of birds, wine as bitter and blue as tears, potatoes soft and warm as summer clouds--and macaroni.

And each day they did the work the Germans forced them to, whether it was cutting the wood, or hauling the pine coffins from the trains, or stacking crumbling bricks in Magdeburg after the American planes bombed it.

At first these brothers and sisters talked about the smell of the dead, the awfulness of the work, and then they didn’t.

And from the same gray metal buckets, these brothers and sisters ate what the Germans gave them soup that was always too thin, meat alive with maggots, bread made from sawdust and sorrow, and they looked at each other with the same cold eyes, and knew that nothing, not even love, could keep them alive till spring.

To read more about my parents please buy my book Echoes of Tattered Tongues.
Posted by John Guzlowski at 4:28 PM

My father and his family were in Buchenwald too. His name was Jerzy Neuman or Neumann

My mom was raised in Poland and I have been trying to find more about her side of the family. She mentioned camps but wouldn't really talk about it. If you can point me in the right direction for finding out about my family there I would be grateful.

Can you tell me how to search lineage in Poland. My dad was an American GI and married my mom in Germany. She was raised in Poland. I am trying to get as much information as I can. My mom had terrible nightmares about what had happened to her before she met my dad. She wouldn't talk much about it.

Hi, Barbara, I strongly recommend the International Tracing Service. It is a free service that helps people get info about their family members who were in the labor camps in Germany during the war and the refugee camps afterward.

You just need to give them your parents' names and they do the rest. I got 50 pages of documents from them about my family.

Here is a lot of contact info from them.